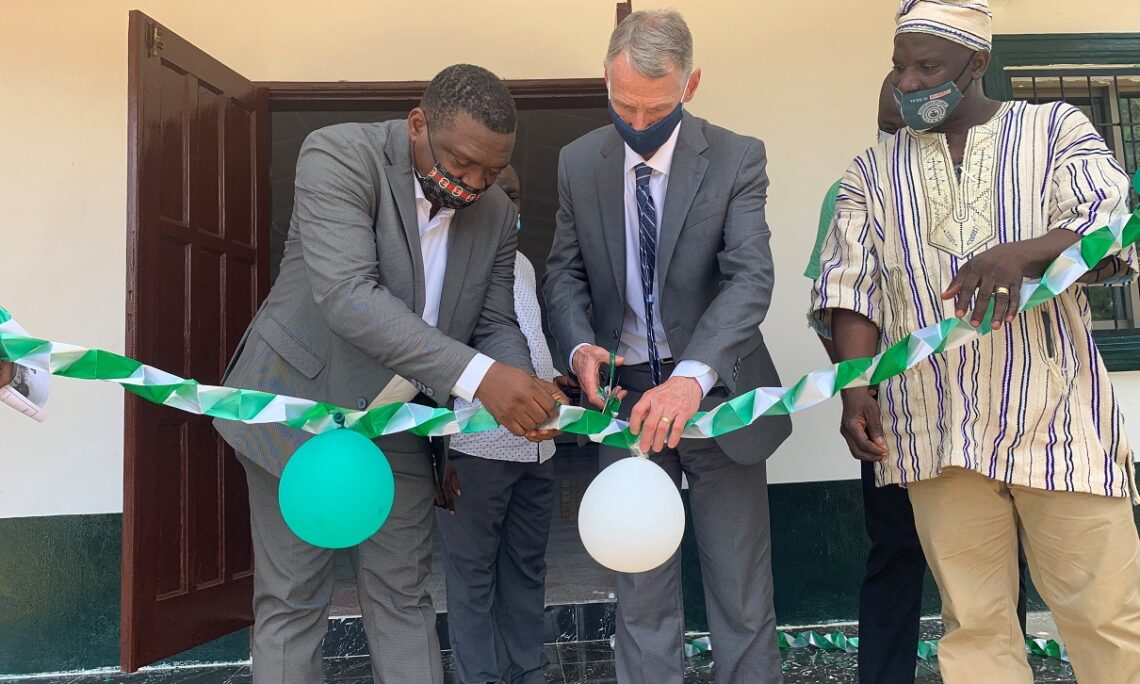 USAID Mission Director Jim Wright believes that “Liberia has a central role in the fight against climate change.”  Director Wright spoke on Wednesday, October 6, 2021, when he inaugurated the new USAID-funded Conservation Hall with the faculty and students of the Forestry Training Institute (FTI) in Tubmanburg, Bomi County.  He noted that Liberia is home to more than 40 percent of the Upper Guinean Forest, the largest share of one of the world’s most significant ecological preserves.  Director Wright added that the available scientific data indicate that preservation of natural resources is critical to the fight against climate change and that “the United States is committed to helping Liberia to preserve the Upper Guinean Forest and contribute to global climate change mitigation efforts.”

Director Wright noted that the success of climate change mitigation efforts in Liberia rests on the shoulders of the FTI students, who he thanked for their “commitment to preserving their country’s precious natural resources.”  Noting that Liberia’s development depends on the talents and abilities of its youth, Director Wright said the FTI students reminded him of young healthcare workers he met on a recent trip to Margibi, Bong, and Nimba Counties, “who are working against immense odds to provide their fellow Liberians access to healthcare, including making COVID-19 vaccines available to people in their local areas.”  The United States stands with the people of Liberia as we work together to recover from the COVID-19 pandemic.  We have already provided more than 302,000 vaccines, along with research and program support and expert advisors, and call on all Liberians to take the COVID-19 vaccines.

The Managing Director of the Forest Development Authority of Liberia, Mr. Mike Doryen, thanked the U.S. Government for its assistance to the FTI.  Director Doryen said the Government of Liberia is taking steps to strictly enforce laws that protect Liberia’s forest resources, including prosecuting and imposing jail sentences on those who violate the “country’s forest laws.”

The new USAID-funded FTI Conservation Hall will provide students and faculty with more space for lectures, seminars, workshops, and other events.  Director Wright called on the FTI and the Government of Liberia to allocate the resources necessary to maintain the Hall, which will serve to enhance the educational experience and employment opportunities for FTI students and graduates engaged in the management and protection of Liberia’s natural resources.

In addition to funding the construction of the new Conservation Hall, USAID provided other assistance to the FTI, including the development of a new curriculum that reflects the priorities of the Government of Liberia regarding sustainable natural resource management.

We are in the business of building future together.  The people of the United States give more than $110 million each year in support of Liberia.  In return, we ask that Liberians continue to grow their democracy, practice free and fair trade, invest in their people, and sustain and build upon the results to produce a peaceful and more prosperous tomorrow.