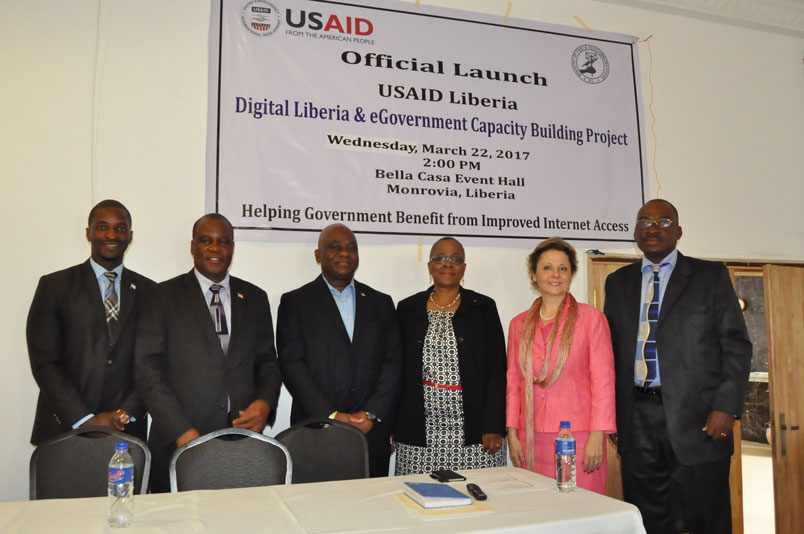 Monrovia, Liberia – The United States Agency for International Development (USAID), in collaboration with the Government of Liberia (GoL), today launched the USAID Digital Liberia and e-Government Project in Monrovia.

In support of the GoL’s e-Government Strategy, the Digital Liberia and e-Government Project will improve the GoL’s performance and bring it closer to the people through the development of internet and computer technology capability. This USAID funded project will improve the GoL connectivity and institutional capacity that is necessary for the provision of effective services, progressing Liberia towards the creation of a sound national ICT platform now and for future generations. Liberia will be in a better position to tell its story, engage with the world and enhance health, education, agriculture and other public outcomes, and promote economic growth and private sector development.

Speaking at the project launch, the United States Ambassador to Liberia, Christine A. Elder, noted that of the Digital Liberia and e-Government Project builds on momentum started before the Ebola crisis in strengthening Liberia’s ability to prevent, detect and respond to future crises.

The US Ambassador emphasized that the Project will support several GoL Ministries, Agencies and Commissions to improve decision making and management. She added that the Project will identify sustainable government digital initiatives and help the GoL take advantage of various technologies to digitize institutional systems and processes.

Reaffirming the United States Government’s partnership and continued support to Liberia, Ambassador Elder expressed the hope that the effective use of ICT and digital tools will enhance, expedite, and make permanent the many GoL reform efforts in procurement, transparency, decentralization, and improved public service delivery.