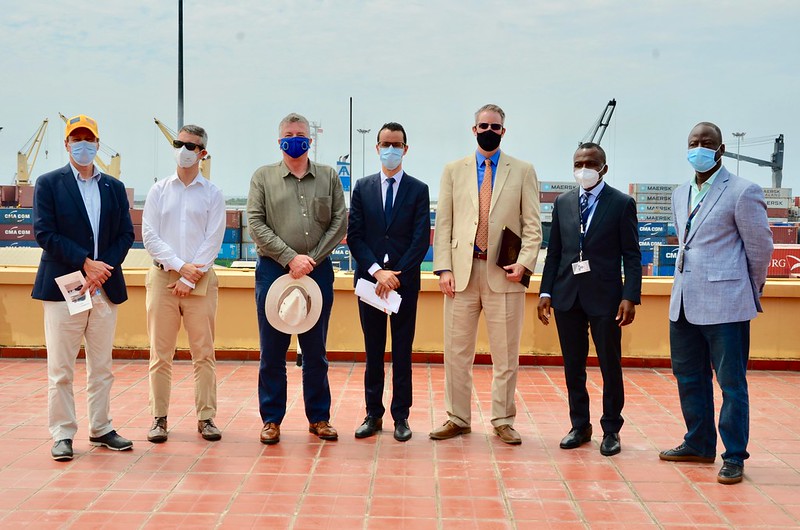 Ambassador McCarthy thanked APM Terminals Liberia management for their critical contributions to ensure safety and security compliance at the Freeport of Monrovia, enabling Liberia’s removal in December 2020 from the U.S. Coast Guard’s Port Security Advisory after many years on the watch list.  Ambassador Delahousse underscored the efforts of APM Terminals Liberia to train a skilled Liberian maritime and port workforce, noting that APM has only three expat senior managers; the company employs 230 direct employees and over 1,000 subcontractors.

Though APM Terminals Liberia’s concession agreement permits annual tariff increases according to a formula agreed upon with the Government of Liberia, the company has not increased its tariffs in three of the last five years in view of Liberia’s difficult economic situation.  APM Terminals Liberia’s tariffs are a small percentage of the overall fees imposed by the Government of Liberia on shipping companies and importers to bring goods into Liberia.

Both Ambassador McCarthy and Delahousse noted the importance of foreign investment, which brings good jobs, infrastructure, and tax revenue to the Liberian government and people.  They also praised APM Terminals Liberia’s corporate social responsibility, which has led the company to stand with Liberia through both the Ebola epidemic and the COVID-19 pandemic and make substantial donations of medical facilities and supplies.

APM Terminals has demonstrated its readiness to be a long-term partner in Liberia’s economic development and growth; the company is poised to help Liberia attract new investment, increase jobs, and revenue.  The Government of Liberia’s efforts to foster a transparent and welcoming business environment, through respectful and open dialogue, will make these opportunities a reality.