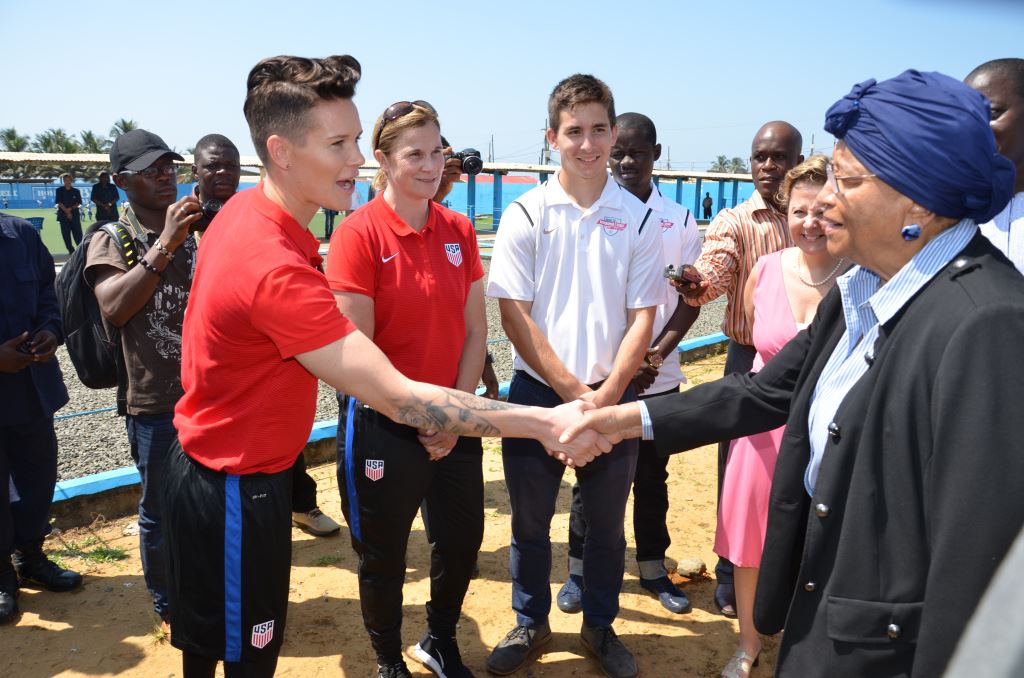 “We are excited to have Jill and Ashlyn in Monrovia to highlight the importance of educating girls and young women,” said U.S. Ambassador to Liberia Christine Elder.  “They are not only proven leaders on the field, but also through their tireless efforts to help young women achieve their fullest potential through programs such as ours.  We look forward to advancing the conversations they will start on women’s empowerment during this visit.”

Coach Ellis and Harris will be visiting as Sport Envoys supported by the U.S. Department of State and U.S. Soccer, the governing body of soccer in the United States.  In addition to contributing to Monrovia Football Academy’s soccer training and academic classes, Ellis and Harris will also speak to young emerging women leaders and school-aged youth at several events highlighting  the importance of women’s empowerment and education.

Coach Ellis said: “I’m thrilled that Ashlyn and I have the opportunity to visit Liberia and support Monrovia Football Academy. They’re doing groundbreaking work by giving girls the chance to play football, and we want to help out in whatever way we can.  We’re also excited to speak on leadership and interact with some of Liberia’s most influential public figures.  Huge thanks to U.S. Embassy Monrovia and SportsUnited for making this happen!”

The Sports Envoys are contributing to the United States’ continuing work to empower women and ensure that girls have equal access to education, as highlighted during First Lady Michelle Obama’s trip to Liberia in June.  During that trip, Mrs. Obama promoted the Let Girls Learn program in partnership with the Government of Liberia.

Let Girls Learn is a U.S. initiative designed to tackle obstacles facing adolescent girls around the world through support, programming, and partnerships with U.S. agencies such as the Department of State, USAID, Peace Corps, and the Millennium Challenge Corporation.  In addition to investing money in girls’ education, Let Girls Learn also seeks to change how women and girls are viewed and valued around the world.

Investing in adolescent girls through education and sports benefits not only girls and their families, but entire communities and economies.  When girls remain in school and take part in healthy activities like sports, they are more likely to become a part of the workforce and invest in their families and communities.  When an adolescent girl drops out of school, she faces increased risks of early marriage, early pregnancy, HIV infection, and health problems.