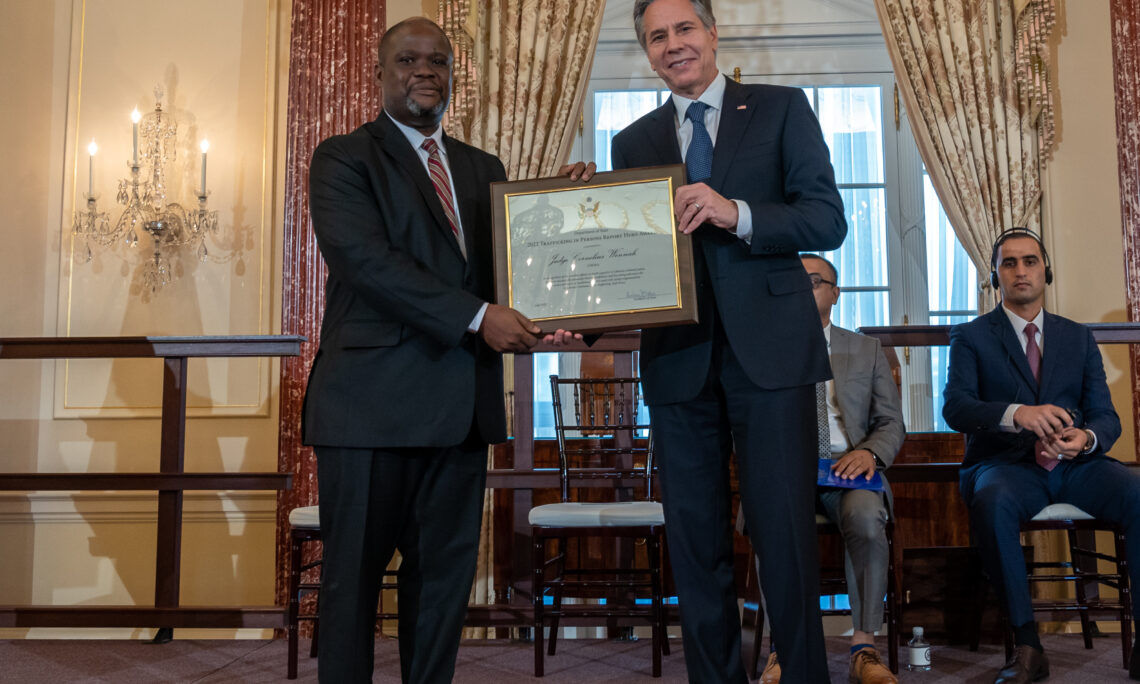 This year’s report, the 22nd installment, includes narratives for 188 countries and territories, including the United States. The annual report uses a tier system to rank countries and evaluate each government’s actions to combat trafficking assessed against specific criteria outlined in the Trafficking Victims Protection Act of 2000 (TVPA).

This year, Liberia was upgraded from Tier 2 Watchlist to Tier 2 citing that “the government demonstrated overall increasing efforts compared with the previous reporting period, considering the impact of the COVID-19 pandemic on its anti-trafficking capacity.”

In addition to the release of the TIP Report, the Department of State honors individuals around the world who have devoted their lives to the fight against human trafficking by awarding them the TIP Report Hero Award and inviting them to participate in an International Visitor Leadership Program (IVLP). This year, Judge Cornelius Wennah of Liberia was one of the six individuals honored by U.S. Secretary Antony Blinken for their personal efforts to make an extraordinary difference in the global fight against human trafficking. He is also the first Liberian to be awarded this honor.

As a recipient of the 2022 TIP Report Hero Award, Judge Cornelius Wennah was recognized for his tireless devotion to improve Liberia’s anti-TIP track record. Prior to his current position as a Residential Criminal Court Judge in Bong County, he was Head of Felonious Crimes and a prosecutor in the Ministry of Justice (MOJ), investigating, prosecuting, and advising on TIP matters and other crimes.  He is distinguished for being a TIP training curriculum developer and trainer country-wide on a project funded by the Bureau of International Narcotics and Law Enforcement (INL).

Since 2020, Judge Wennah has assisted the International Development Law Organization on an INL-funded project to develop international-standard-level TIP training curriculum for judges, prosecutors, and law enforcement personnel, to raise awareness and develop and strengthen justice sector actors’ capacities to prevent and fight TIP crime. Judge Wennah was instrumental in the development and adoption of a TIP bench book for judges and a TIP handbook for investigation and prosecution for law enforcement and prosecutors – harmonizing international standards and local practice – without compromising on best practices, lessons learned, or international standards.

Considering Judge Wennah’s body of work and the Liberian government’s upgrade to Tier 2, the Office to Monitor and Combat Trafficking in Persons stated that they “encourage the government to continue building on its progress over the last year and focus efforts on expanding capacity for shelter and victim protection services and provide more resources and training to law enforcement officials so they can effectively investigate and prosecute trafficking crimes.”

Click the links below to read the 2022 Trafficking in Persons Report and learn more about human trafficking: