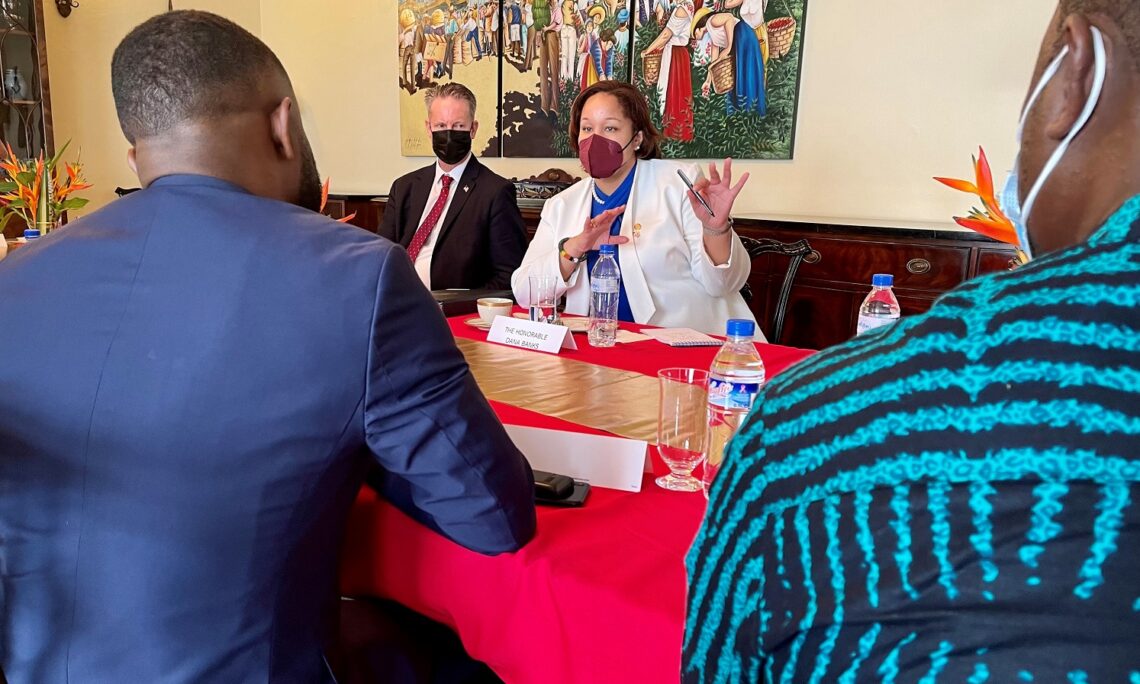 Special Assistant to the President and Senior Director for Africa at the National Security Council Ms. Dana Banks yesterday met with the Elections Coordinating Committee Steering Committee at an event hosted by Ambassador Michael McCarthy.

The U.S. Presidential Delegation to the Bicentennial Celebration of the Republic of Liberia, which also included Secretary of the Smithsonian Institution Lonnie Bunch and Bishop of the Fifth Episcopal District of the Christian Methodist Episcopal Church and Chair of the Governing Board of the National Council of Churches in the United States Rev. Dr. Teresa Jefferson-Snorton, visited Liberia on February 14.

The Elections Coordinating Committee (ECC) is a civil society network headed by six lead organizations that monitor, document, and report on elections in Liberia.  The Steering Committee consists of the executive directors of the Center for Democratic Governance – Oscar Bloh is the current ECC Chair – the West Africa Network for Peacebuilding, the Naymote Partners for Democratic Development, the Center for Media Studies and Peacebuilding, the Women NGO Secretariat for Liberia, and the Institute for Research and Democratic Development.

The ECC came together in 2010 with support from the United States Agency for International Development (USAID).  This on-going support has allowed the ECC to observe all national elections and high-profile by-elections since 2011.

The civil society leaders discussed the work they are doing to advocate for electoral reform, observe elections, and provide nonpartisan assessments on elections and electoral violence.  They also shared their perspectives on the 2023 presidential election.

Matthias Yeanay, the executive director of the Institute for Research and Democratic Development, noted that the ECC’s main objective is “to make sure there is a level playing field for all elections.”  Chair Bloh warned that “widening socio-economic inequalities in Liberia are leading to an exclusive, fragile democracy.”  The group added that the steady decline of women’s participation in government and electoral politics, the inability to monitor campaign finance, the concerns about the perception of independence of the judiciary, and the obstruction of equal access to state media as required by the Liberian constitution are all issues of concern that need to be addressed.

Senior Director Banks reiterated the United States’ commitment to free and fair elections and called for candidates to work with civil society to prevent violence and promote election integrity.  She noted that the historic relationship between the United States and Liberia being recognized at the Bicentennial Celebration is one based on shared democratic values.  She also expressed her appreciation for the consistent and nonpartisan work that the ECC does, stating that their role is an essential part of a resilient democratic process.

Senior Director Banks shared that “[Protecting democracy] is my life’s work too!  I would love to explore all the ways we can work together,” while noting, “democracies are never perfect; democracies are fragile, so you have to keep pushing.”  U.S. Agency for International Development (USAID) Mission Director Jim Wright added, “You all will play a critical role in the upcoming elections, just as you have in recent by-elections.”

The U.S. Government plans, through USAID funding, to support the ECC to independently observe the full electoral cycle in 2023 and to report their findings and recommendations to the people of Liberia.