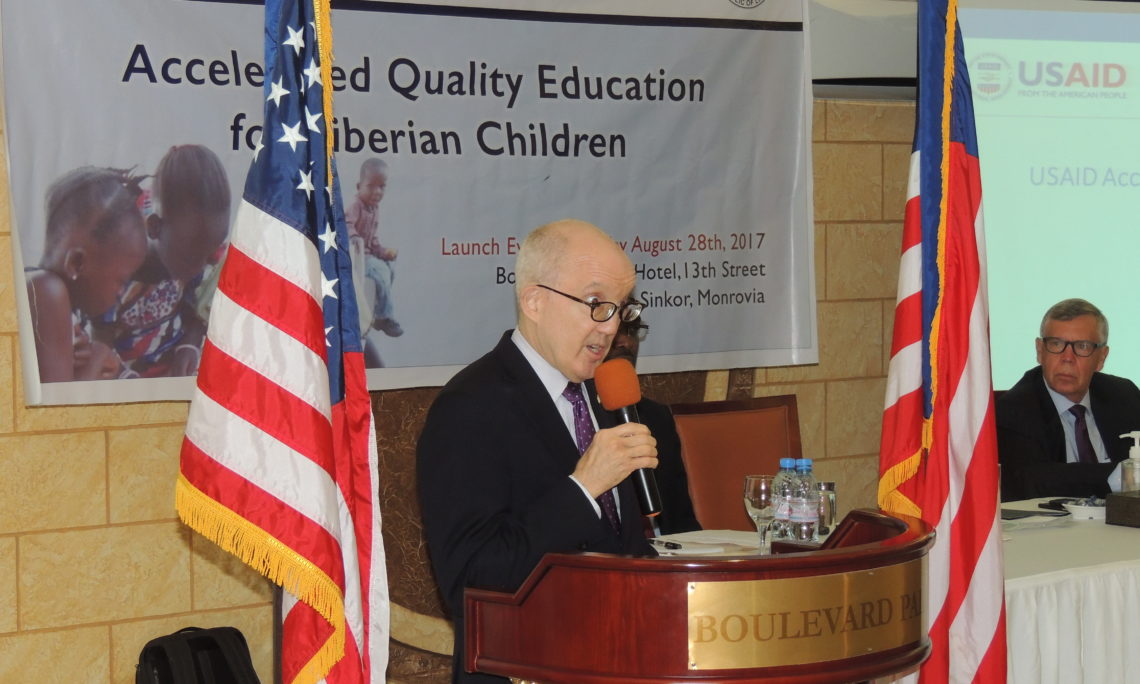 (Monrovia, August 29) – The United States Government through the U.S. Agency for International Development (USAID) and the Ministry of Education (MoE) on Monday, August 28 launched the Accelerated Quality Education for Liberian Children (AQE) project. The project will provide quality basic education to out- of- school children in Liberia between ages 8-15.

The new project will be implemented in 260 Accelerated Learning Project sites in Bong, Grand Bassa, Lofa, Margibi, Monsterrado, and Nimba counties over four years. It will provide access to basic education for 48,000 children and adolescents who are currently not in school. AQE will also train and support 780 community teachers to improve quality instruction that will lead to the acquisition of equivalent primary school competencies for the learners.

Speaking at the launch event, U.S. Chargé d’Affaires, Samuel Watson said it is through education that an individual, a community and ultimately a country can lay the solid foundations for success and development in the 21st century.

Chargé Watson said the U.S. Government looks forward to the continued work with Liberian authorities, international development partners, local organizations and communities to support efforts at improving access to quality education. “Through the Accelerated Quality Education for Liberian Children, the U.S. Government once again reconfirms its commitment to this cause,” he said.

Education Minister George Werner thanked the United States Government for its numerous investments in the education sector of Liberia. He said some of the young learners have skills that must be further developed alongside their numeracy and literacy skills.

The USAID AQE Program implemented through a partnership between the Ministry of Education and the Education Development Center is one of the many assistance projects in Liberia provided by the American people. USAID’s partnership with Liberia supports education, health, economic growth and democracy and governance.

USAID has been supporting education in Liberia by improving access to quality, basic education for thousands of out-of-school youth. Including this new project, the U.S. Government currently supports four education projects. These projects support early grade reading and the education needs of girls who become pregnant and drop out of school. USAID is also provides hygiene facilities in 120 schools which were most affected by Ebola.