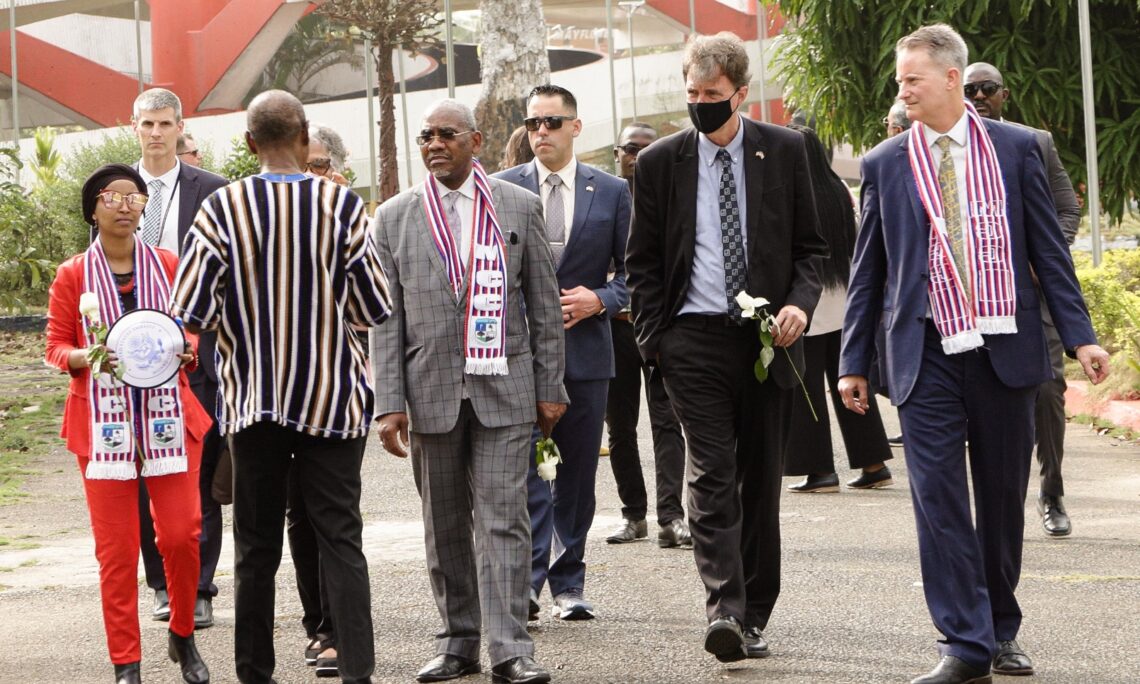 Representative Meeks, who represents a congressional district in New York, was joined by Representatives Ami Bera of California, Ilhan Omar of Minnesota, Joyce Beatty of Ohio, G.K. Butterfield of North Carolina, Brenda Lawrence of Michigan, and Troy Carter of Louisiana.  The delegation is also visiting Sierra Leone, Côte d’Ivoire, and Tanzania during their trip.

The first Black American immigrants who arrived in the land that is now the Republic of Liberia first settled on Providence Island, then called Dozoa, 200 years ago.  Led by Ministry of Information, Cultural Affairs and Tourism guide Ambrose Wiagbe and the Historical Society of Liberia’s Dr. Bill Allen, the delegation toured the historical landmark.  They took the opportunity to commemorate the bicentennial anniversary of this seminal event in Liberian history by walking in the footsteps of those first American immigrants and tossing flowers into the Mesurado River as a symbol of remembrance.  Members of the delegation spoke about the power of just being physically on the island and the potential it has as to become a global tourist destination.

After Providence Island, the delegation visited Providence Baptist Church, one of the three historic Liberian churches founded by the American immigrants and the location of the signing of the Liberian Declaration of Independence on July 26, 1847.  Rev. Dr. Samuel Reeves, the senior pastor of Providence Baptist Church, led a program that included the two other historic churches – First Presbyterian Church and First United Methodist Church – representatives from the Inter-religious Council of Liberia, a reading of the names of the American immigrants who departed New York City for West Africa on the Elizabeth in 1820, and a stirring rendition of the African American spiritual song “Swing Low, Sweet Chariot” by Rev. Laura Pritchard.

The National Archives of Liberia, led by Director General Emmanuel Lomax, displayed the original 1847 Declaration of Independence and the Constitution of Liberia within the church as well.  Ambassador Michael McCarthy was moved by the presence of the historic documents, “It is breathtaking to think how old and sacred these documents are.”

Chairman Meeks spoke passionately about the impression being able to visit Providence Island and Providence Baptist Church was having on the delegation, “The role that Liberia has played in history…  Those that began the slave trade never dreamt that a group of individuals that they had taken to America in slavery…  That 88 of them would fight for their freedom and run away from slavery in America to start a country right here … And so the connections that we have… the oceans that used to divide us… do not divide us anymore.  And it was led by those 88 people coming and working with those that were indigenous to this land, coming together.”

During their visit, the U.S. Congressional delegation also met with President George Weah and the Cabinet at the Executive Mansion, joined a roundtable of civil society organizations and government oversight offices to gain a perspective on key challenges related to transparency and accountability in Liberia, and engaged with their Liberian congressional counterparts at a reception hosted by Ambassador McCarthy.