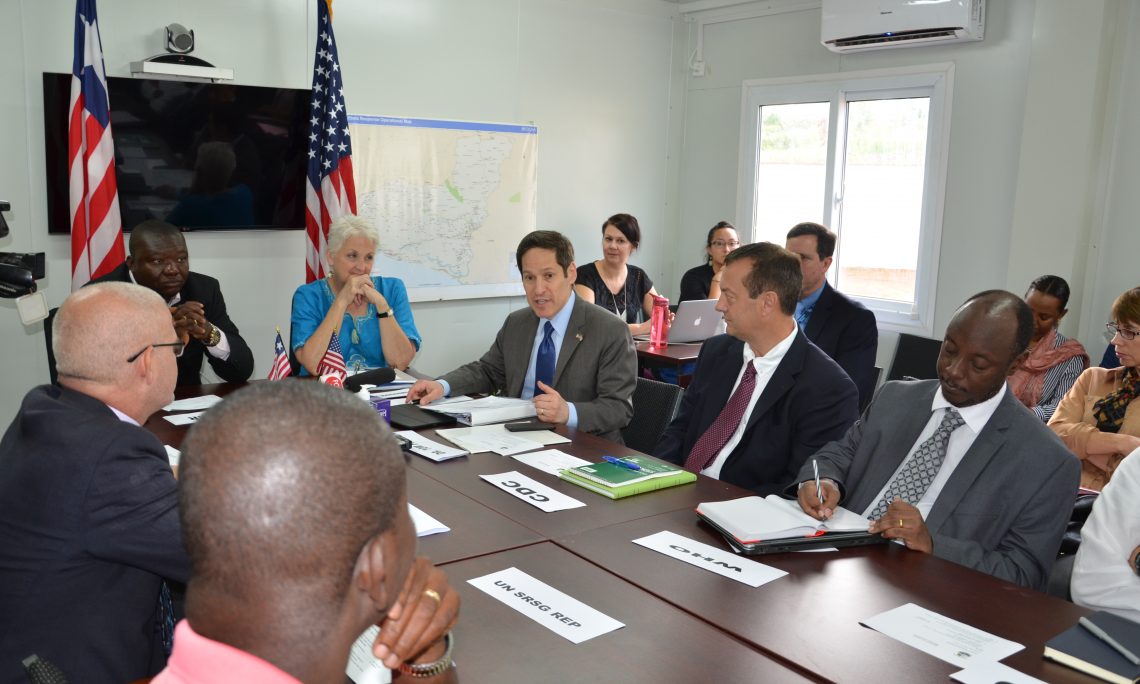 Along with U.S. Ambassador Deborah Malac, CDC Director Tom Frieden welcomes participants to the first class in the Field Epidemiology Training Program to be held in Liberia.

Dr. Tom Frieden, director of the U.S. Centers for Disease Control and Prevention (CDC), made his third visit to Liberia August 4-5, 2015. During his visit, Dr. Frieden met with President Ellen Johnson Sirleaf and also Ministry of Health officials to assess the recent Ebola outbreak and the importance of strengthening surveillance for infectious diseases.

“We’ve made great progress, but we can’t let down our guard,” Dr. Frieden said. “It’s like fighting a forest fire. Leave behind one burning ember and the epidemic could re-ignite. That ember could be one case undetected, one contact not traced or health care worker not effectively protected, or one burial ceremony conducted unsafely.”

In addition to Ebola, Dr. Frieden engaged in discussions about strengthening Liberia’s core public health programs to protect people from malaria, tuberculosis, and diseases like polio that can be prevented by immunization.

Along with U.S. Ambassador Deborah Malac, he welcomed participants to the first class in the Field Epidemiology Training Program to be held in Liberia. This 12-week training has been designed for district health officers to teach surveillance and data analysis skills to strengthen district health investigations. The FETP is modeled on CDC’s Epidemic Intelligence Service Program, which has been training epidemiologists for more than 60 years. Dr. Frieden began his public health career as an EIS officer, investigating outbreaks of measles, typhoid, and multidrug-resistant tuberculosis.

Dr. Frieden first visited Liberia in August 2014, when the Ebola epidemic was growing rapidly. As a result of what he witnessed, he helped mobilize U.S. government support for the Ebola response in Liberia and across West Africa. Since then, CDC has sent more than 1,200 people to West Africa, many of whom have made many trips, including the CDC team that investigated the recent outbreak in Margibi County.

“There will continue to be cases and clusters of Ebola, but an epidemic of the kind we’ve had for the past year never has to happen again,” he said.  “Keeping Liberia healthy depends on both your government and your communities remaining vigilant and working together. Throughout this response we have proven there is strength in unity.”