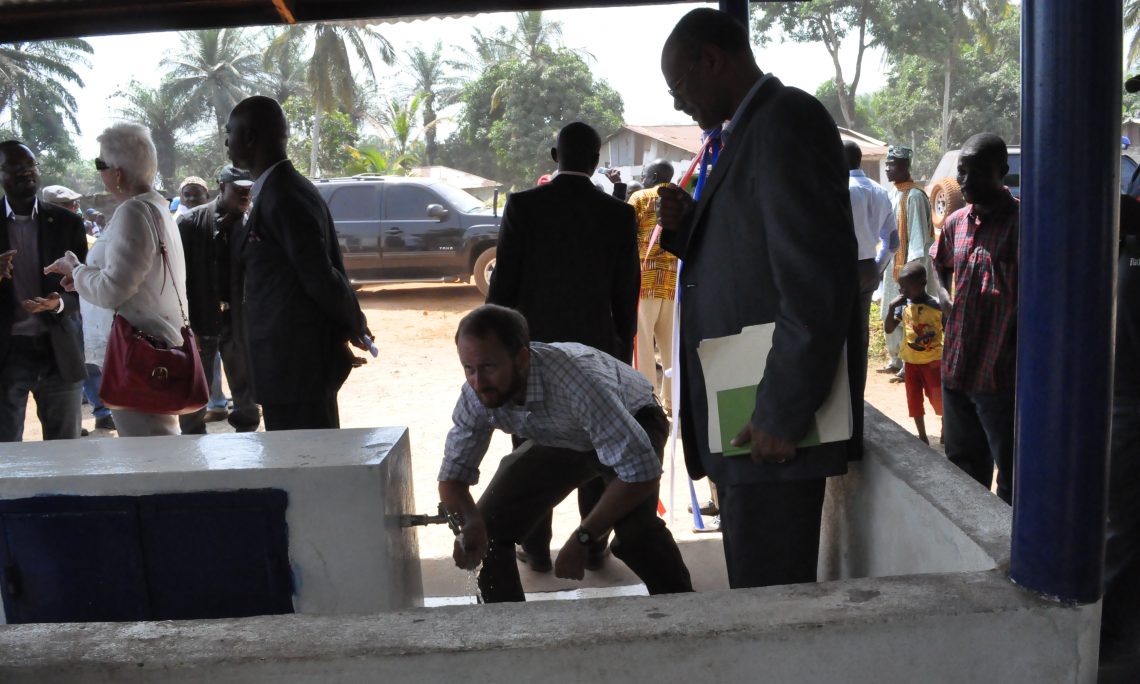 The new pipeline, which extends access from the interim water treatment plant by an additional two kilometers into the community, and the construction of three water kiosks were funded by the U.S. Government and are part of the development of a larger distribution system for piped water that will ensure that 90% of the citizens of Robertsport have access to clean water.

Speaking at the inauguration ceremony attended by Vice President Joseph Boakai and other Liberian Government officials, U. S. Ambassador to Liberia Deborah Malac said rebuilding Liberia’s water infrastructure was no easy task but that the U.S. Government is committed to seeing the full renovation of the Robertsport water system completed in partnership with the Liberia Water and Sewer Corporation, the Government of Liberia, and the Local Steering Committee. “I know this pipeline extension has been a long time coming, and I look forward – as much as you do – to seeing the full renovation of Robertsport’s water system as well as advance the project to Sanniquellie and Voinjama cities”.

Ambassador Malac said clean drinking water is important and fundamental to the wellbeing of every community and said that despite the enormous challenges posed by the Ebola epidemic over the past year the first phase of the project had been completed.  As a result, residents of Grassfield Community-one of the highly populated areas in Robertsport-now have access to potable water.

Vice President Joseph Boakai thanked the U.S. Government for continuing to work with Liberia and said the provision of clean water to citizens is part of the Government’s medium-term development strategy- the Agenda for Transformation. He called on the community to take ownership of the facilities by working to maintain and sustain them. “This is part of showing that you are a responsible people and nation”, he said.

In 2013, USAID Liberia Municipal Water Project (LMWP) partnered with the Liberia Water and Sewer Corporation (LWSC) to rehabilitate an interim water treatment facility and establish a public water point at the plant marking the end of more than two decades in which residents lacked access to piped drinking water. The rehabilitation of the water facility also marked the first phase of USAID support to re-establish piped water throughout the city, along with institutions and systems to ensure its sustainability.

In a recent survey, a significant number of Robertsport’s citizens said they obtain drinking water from the water point but that the location of the facility on the outskirts of town provided only a handful of households with access to the water within a 30-minute walk.  Many residents presently purchase the water from water-sellers who fill jerry cans at the plant and transport them door-to-door. However, with the provision of water through this pipeline, residents will be able to purchase water directly from the source, resulting in savings for the residents, as well as contributing to the long-term sustainability of the system and to public health and local economic development.

The construction of the two-kilometer pipeline and three water kiosks began in September 2014 and was completed in January 2015.  USAID’s Liberia Municipal Water Project and the LWSC provided supervisory and technical support services during the construction.

With the opening of the kiosks, the percentage of households with access to improved drinking water sources in Robertsport will increase from 7 to 29 percent.