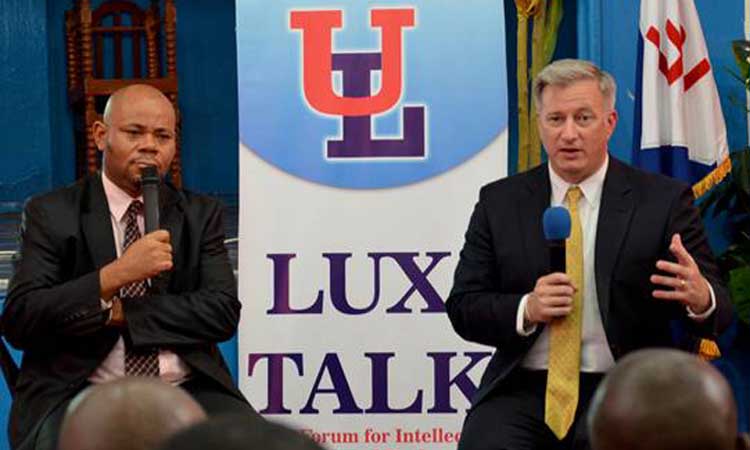 During his visit, Ambassador Richmond also met with civil society organizations active in working to monitor trafficking cases, to help victims of trafficking, and to bring perpetrators to justice. He participated in a meeting of the Liberian government’s interagency TIP Task Force, led by Minister of Labor Moses Kollie and comprised of multiple ministries and agencies which are statutory members of the Task Force. Ambassador Richmond also had the opportunity to meet with Liberian prosecutors from the Ministry of Justice.

Ambassador Richmond concluded his visit to Liberia by delivering a speech entitled “Freedom is the Foundation” on September 10 at the University of Liberia’s “Lux Talk” forum. In his remarks, Ambassador Richmond noted, “There are many cultural practices that are wrong and even illegal within that culture. Chattel slavery was once cultural and legal in the United States – that didn’t make it right or excuse it. We can all think of aspects of our culture that need to improve and change. Liberia’s law is clear that human trafficking is wrong and illegal.”

Ambassador Richmond leads the State Department’s Office to Monitor and Combat Trafficking in Persons (TIP Office), the focal point of the Department’s global efforts to combat modern slavery through the prosecution of traffickers, the protection of victims, and the prevention of human trafficking by objectively analyzing government efforts and identifying global trends, engaging in and supporting strategic bilateral and multilateral diplomacy, targeting foreign assistance to build sustainable capacity of governments and civil society, advancing the coordination of federal anti-trafficking policies across agencies, managing and leveraging operational resources to achieve strategic priorities, and engaging and partnering with civil society, the private sector, and the public to advance the fight against human trafficking. Further information may be found here: https://www.state.gov/bureaus-offices/under-secretary-for-civilian-security-democracy-and-human-rights/office-to-monitor-and-combat-trafficking-in-persons/