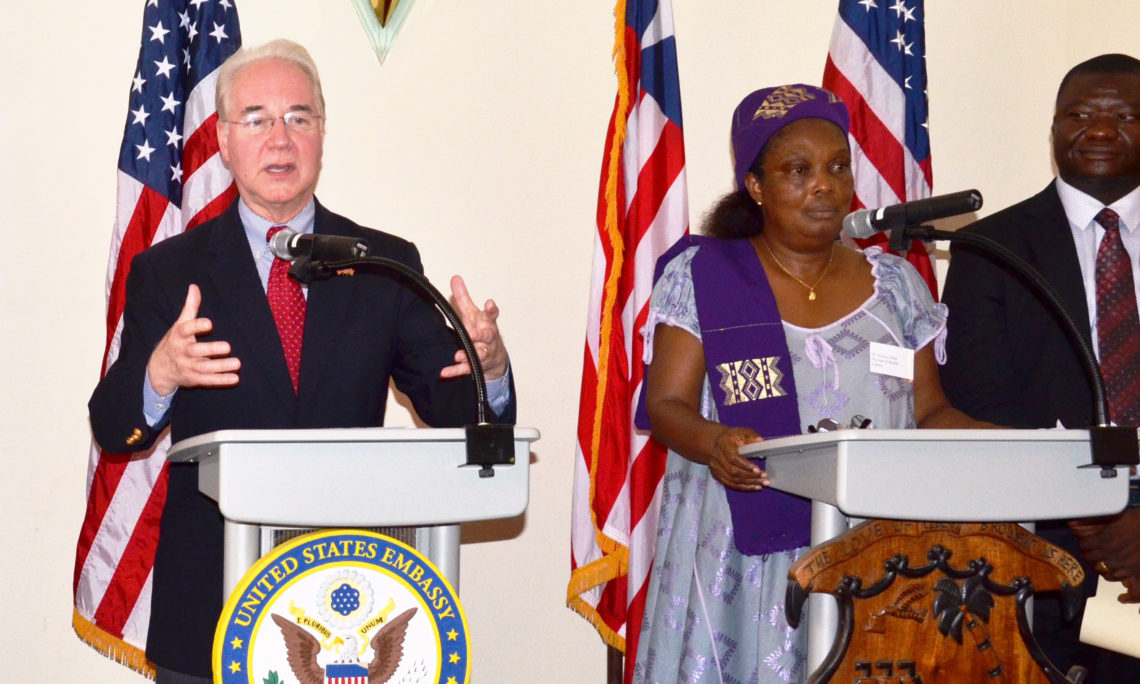 (As prepared, not as delivered)

Hello, I’m Dr. Tom Price, and I have the honor of serving as the Secretary of the U.S. Department of Health and Human Services.

I would first like to thank President Sirleaf for the opportunity to visit Liberia and for her leadership and kind hospitality.

Also, thank you to her team, particularly, Minister of Foreign Affairs, Marjon Kamara, and Minister of Health, Dr. Bernice Dahn.

On behalf of the United States Department of Health and Human Services, we thank you for the work the people of Liberia are doing and for the successful partnership that we have been able to form.

Together we are working to improve the health of Liberians, while helping to maintain the health security of the United States and the entire world.

I would also like to thank our Ambassador to Liberia, Christine Elder, and her whole embassy team, including Deputy Chief of Mission, Sam Watson, for your continued work to keep Americans safe at home and abroad, and also for all that you have done in support of our delegation’s visit to Liberia.

Additionally, I want to recognize and express my deep pride in the U.S. Department of Health and Human Services staff here on the ground in Liberia—including doctors, nurses, public health workers, and experts from across the Department including the Centers for Disease Control and Prevention, National Institutes of Health, and Health Services and Resources Administration.

Your work to promote global health security and your commitment to find and stop disease outbreaks here and around the world—whether they are natural, accidental, or deliberate—keeps Americans and others around the world safe.

Thank you for all that you do and for your continued vigilance.

The partnership between the United States, the Department of Health and Human Services, and the people of Liberia has been one of mutual cooperation and has had a lasting effect on the stability, health and well-being of Americans and Liberians alike.

Together we have worked hand in hand to fight the tragedy of Ebola, and in the process have succeeded in improving the health system here in Liberia.

Following outreach to the United States, it was President Sirleaf’s tremendous leadership and a robust response from several U.S. Government agencies and other international partners during the Ebola Crisis that helped move Liberia toward successful containment of Ebola at a faster pace than other countries affected in the region.

Because of the work done during and following the Ebola response, Liberia now has many public health systems and resources that it did not have before – emergency operations centers, laboratories, stronger surveillance systems, and in-country technical support.

These systems, and the people who are now trained to use them, are key to achieving lasting national health security.

Together we have much to be proud of, specifically Liberia’s progress in the ability to prevent, detect, and respond to infectious disease threats.

We are here this week to promote global health security and to express President Trump and his Administration’s appreciation for this great work being done here in Liberia.

We know that by ensuring that all countries around the world are better prepared to prevent, detect, respond to, and control disease outbreaks at the local level, we can reduce the threat of international health emergencies.

The United States and the Department of Health and Human Services are committed to working with Liberia to address the remaining challenges in Liberia’s recovery from the devastating effects of the Ebola outbreak, and we look forward to continuing to work side-by-side to improve disease detection, enhance laboratory services, maintain a rapid and effective emergency response, and develop the health workforce.