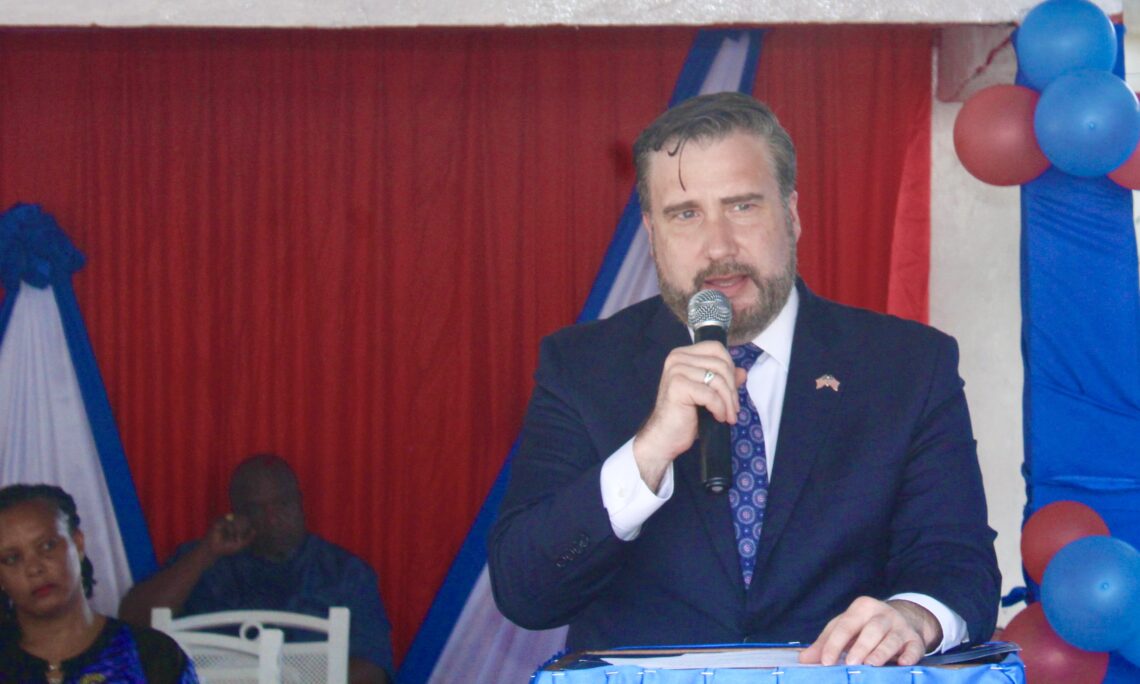 Please allow me to rest on existing protocol.

I am pleased to be with you today to mark another important milestone in the strong and historic relationship between Liberia and the United States.  Our two countries share common values, and our partnership is reinforced by our joint commitment to strengthening democratic institutions, and to ensuring security and stability to the benefit of our citizens.

A commitment further strengthened by our countries’ participation in the Summit for Democracy, and President Weah’s recent publication of Liberia’s nine (9) associated interventions.

The Bureau of International Narcotics and Law Enforcement, commonly known as INL, is excited to see the Liberia Security Radio Network contribute to those efforts by enabling civilian law enforcement and their partners to respond swiftly and effectively to threats.

Because at its core, government is intended to safeguard its citizens and to ensure the security of the nation. And that’s a responsibility that my Bureau, INL, takes seriously.

On behalf of the U.S. Department of State, INL works to keep citizens safe by engaging with partner governments to counter crime, illegal drugs, and instability, and by implementing programs in about 90 countries worldwide. We work with partner governments to confront common threats – such as corruption, violence, and transnational organized crime – and contribute expertise to strengthen criminal justice systems. For the last 17 years, INL has partnered closely with the Government of Liberia.  Our first engagement started in 2005 with the secondment of police advisors to the United Nations Mission in Liberia, or UNMIL’s, police contingent. As UNMIL drew down its forces, INL broadened its support and today, INL works closely with the Liberia National Police, Liberia Immigration Service, Liberia Drug Enforcement Agency, the Bureau of Corrections and Rehabilitation, the Ministry of Justice, and the judiciary.

Our efforts in Liberia range from countering trafficking in persons, narcotics, and wildlife, to supporting the advancement of women in law enforcement, and promoting trust and accountability between the police and civil society. This type and level of engagement is unique to Liberia, which has one of the largest INL programs in the Africa region. The Liberia Security Radio Network is also a unique INL-funded project in Africa that began with conversations starting as far back as 2009. But it was in 2013 that INL and the Government of Liberia committed to building the network you see today, and 9 years later we are here to celebrate this momentous accomplishment.

With this network, law enforcement officers in Monrovia can call their counterparts in Voinjama. If there is a security threat on the border close to Ganta, that information can be shared immediately with other leeward officers to facilitate a response. This capability has the potential to completely transform the way Liberia reports and responds to emerging threats, which ultimately strengthens the security not only of Liberia but of the region as well. For INL, this is of utmost importance as the security threats that present themselves in coastal West Africa continue to evolve. We know that Liberia is well positioned to tackle these threats and we look forward to seeing how Liberia uses this network in the years and decades to come.

In light of the successes we celebrate today, we must remember that security and stability are objectives we must intentionally work towards every single day and cannot be taken for granted. We also cannot ignore the role that corruption plays in undercutting success.

Corruption destabilizes governments, undermines democracy, and provides openings for dangerous groups such as criminals, traffickers, and terrorists. It’s important that we confront this truth and act accordingly, as if our future relies on it.  That is why American tax dollars go to INL, and then to our partners, to help countries fight corruption.

We must also do it to honor the individuals who made this network a reality, especially those who are no longer with us.  INL would like to acknowledge the support of the Ministry of Justice, the National Security Agency, and the Technical Center of Excellence—and especially Mr. Dyeu Allen who passed away in 2020. Additionally, INL will be memorializing Timothy Huff, a technician with Olgoonik Solutions who contracted COVID while working on this project and passed away in 2021. INL will be adding his name to the INL Memorial Wall in Washington, D.C. to honor his contribution to this project, INL, and Liberia.

Last but certainly not least, we want to recognize Bruno Ciapparelli [chop-AH-reL-ee], the Senior Radio Communications Advisor who has been supporting the Liberia Security Radio Network since its beginning. Words cannot capture the dedication and support that Bruno has provided to this project, and how important his involvement has been in taking us from concept to reality.  Bruno – thank you for your years of hard work, technical expertise, and commitment.

As Ambassador McCarthy said, this milestone represents years of hard work and sacrifice. INL knows that Liberia has the potential to be a regional security leader and we look forward to seeing what Liberia does with that responsibility.  With that, I share my sincere gratitude to Minister Dean and Ambassador McCarthy for their commitment and support. Thank you.