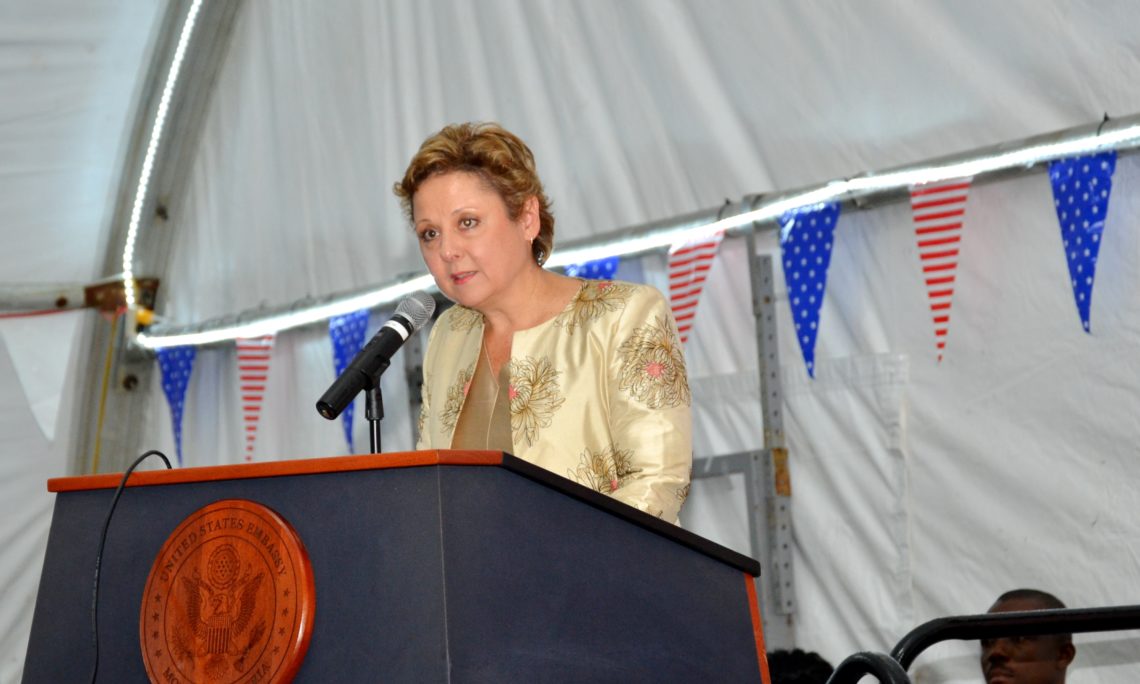 Welcome and Happy Fourth of July!  Today we celebrate the 242nd anniversary of the vote in 1776 by the Continental Congress to declare our independence from Great Britain.  It is my pleasure to extend greetings from President Donald Trump, Secretary of State Mike Pompeo, and the people of the United States.

To all our special guests, we are honored by your presence.  It is my great privilege to welcome His Excellency, the President of the Republic of Liberia, Dr. George Manneh Weah and First Lady Clar Weah; as well as the Honorable Speaker of the House and members of the Legislature; his Honor the Chief Justice of the Supreme Court; the Dean of the Cabinet and Foreign Minister and as well as other government officials; the Dean and representatives of the diplomatic corps and UN agencies; traditional and religious leaders; civil society; implementing partners; colleagues, friends, and of course representatives of the Fourth Estate, whose dogged pursuit of truth undergirds all democratic systems. On the topic of free expression, I would like to acknowledge, Mr. Speaker, the passage in the House yesterday of legislation the President advanced to decriminalize speech offenses.  Enshrining the freedom of expression is at the core of any healthy democracy.

Mr. President, thank you for the felicitations conveyed which have been shared with the White House.  Today marks my third celebration of the U.S. Independence Day in Liberia.  At this time last year, Liberia was looking ahead at a crossroads – national elections which would serve as a test of the strength of your democracy – but now we all stand on the opposite side of that intersection.   Liberians should take pride in the tremendous resolve demonstrated by her people, and the strength and integrity of her institutions which carried the country through its greatest test of democracy since your nation’s founding.

On a recent plane ride, I looked at my passport and thought about a couple of things: first, how lucky I was to possess it and to have the privilege of standing before you representing my country.  Then, flipping through it, for the first time I read the quotes on each page.  There are 23 of them in all, borrowed from great speeches and literature, delivered by presidents and poets.  Only one was written by a woman – a prominent African-American scholar named Anna Haywood Cooper, born 160 years ago.  She wrote about freedom: “The cause of freedom is not the cause of a race or a sect, a party or a class – It is the cause of human kind, the very birthright of humanity.”  Hers was an early call for equality, for tolerance, and for respect, despite the profound differences separating social and political life.  She died at the age of 105 in 1964 – the very year Martin Luther King won the Nobel Peace Prize.

For Americans, today is a day of reflection – reflection on the often difficult and costly road to attain freedom, to protect and defend freedom, and to examine our understanding of freedom.

Viewing freedom through a broader lens in many ways defines the underlying goal of my country’s development cooperation with Liberia.  Currently, our largest projects help build Liberia’s infrastructure by improving roads and access to electricity and the internet – three sectors that have the potential to transform this nation.  Our programs to strengthen the security sector are providing Liberians confidence that their own forces can protect them and their freedom from external and internal threats.  Our programs that enhance access and quality in the healthcare and education sectors aim to remove artificial constraints to progress imposed by illness or an inadequate education system.

The United States was proud to work with Liberia and her partners in preparation for the historic elections, helping capacitate the security sector, the NEC, the media, the judiciary, political parties, and civil society so each could play its essential role.  We were just as proud to stand among the tens of thousands of Liberians at SKD Stadium on January 22nd to witness the moment that embodied Liberia’s lifelong quest for inclusive, multiparty democracy.  The swearing in of a new president in the presence of both a retiring president as well as the less successful candidate for the office was remarkable.

Mr. President, your new government shoulders significant challenges; chief among them jump-starting the economy – which is the only sustainable path to lifting people out of poverty.  We share your government’s sense of urgency to move the country forward in its development.

Broad reforms and bold steps to inhibit corruption are needed to transform the business climate to attract domestic, regional, and foreign investment, to grow the economy and to seek further fiscal and monetary stability.  Successful economies in Africa have mastered a balancing act that creates a combination of laws and incentives that deepen the relationship with companies that are cornerstones of their economies and attracts new business while providing governments much needed revenues and creating domestic jobs – especially for youth.  Liberia will attract investment and jobs by opening its economy, not by narrowing it.

To end, I would like to thank all of our Embassy staff who worked hard to put this event together.  I would especially like to acknowledge the American officers ending their tours in the coming days and weeks, for their efforts to strengthen our bilateral partnership across a range of areas.  They are smart and dedicated public servants who had the courage to challenge me when they thought my proposed course of action might not have taken all key factors into account.  Without exception, I learned from each of them in our exchanges, and I am a better and more effective leader for having served with them.

Thank you all once again for coming today to help celebrate our independence, and the partnerships we cherish with each of you.  On the 242st birthday of the United States of America, and on behalf of the President of the United States, Donald Trump, I invite you all to a toast.