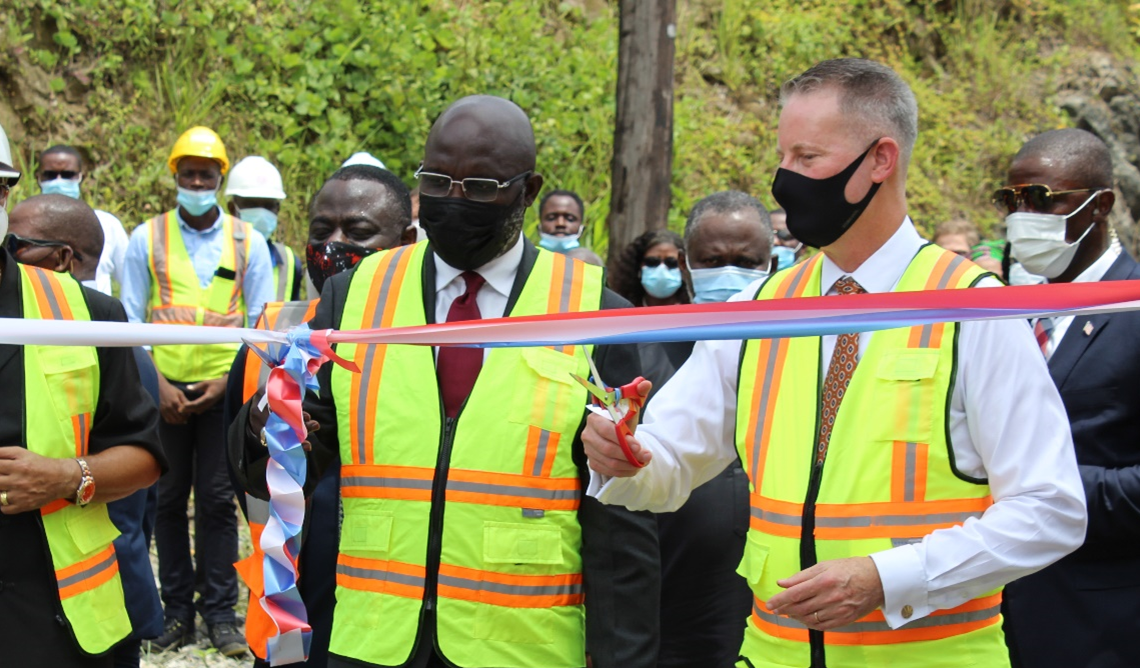 On Wednesday, April 29,  Ambassador Michael McCarthy joined His Excellency President George Manneh Weah, Millennium Challenge Account-Liberia (MCA-L) CEO Monie Captan, and the Board of MCA-L in celebrating the close of the Millennium Challenge Corporation (MCC) Compact at the Mt. Coffee Hydropower Plant.  The $257 million Compact aimed to encourage economic growth and reduce poverty in Liberia by addressing the inadequate access to reliable and affordable electricity in the country and the poor quality of road infrastructure.

Ambassador McCarthy led his remarks by recognizing the accomplishment of Liberia’s membership in an exclusive group of countries that qualified, received, and completed a Millennium Challenge Compact.  “It is particularly fitting that this Compact was started under President Ellen Johnson Sirleaf and completed under President George Weah—symbolic of the fact that our countries remain partners and keep our commitments regardless of political changes,” Ambassador McCarthy noted.  He also looked to the future during his speech:  “It is our hope that with long-term vision, sound policy decisions and good governance, Liberia will qualify and be considered for another compact.  This approach has benefits well beyond the Millennium Challenge Corporation.  It signals to investors that Liberia is ready to compete freely and fairly for investments, and has the commitment and capacity to make them sustainable.”

President Weah, after acknowledging the donors who made the MCC Compact possible, including the American people, the Governments of Norway and Germany, and the European Investment Bank, also looked toward future possibilities: “As President of Liberia, I take this responsibility seriously.  I hereby assure the American people that my government will prioritize … the investment made under the Compact.  Liberia will not remain complacent with only one Compact; we will make it our mission to strive for the second one.”

The ceremony, which culminated in a ribbon-cutting at the Mt. Coffee Hydropower Plant power station and a commissioning of the 5-kilomter Raw Water Pipeline, included video congratulations from a number of supporters from the United States, including acting MCC Chief Executive Officer Mahmoud Bah, U.S. Ambassador to the United Nations and former U.S. Ambassador to Liberia Linda Thomas-Greenfield, former U.S. Ambassador to Liberia Christine Elder, U.S. Senator Christopher Coons, and U.S. Representative David Price.  These video messages can be found at: https://www.mcc.gov/news-and-events/feature/liberia-closeout.

Ambassador McCarthy concluded the event by recognizing the MCA-L staff and expressing a note of confidence: “I am thrilled to be with you here today to celebrate the MCC Compact, which was implemented by Liberians, for Liberians.  I am confident that you will indeed sustain these efforts and build on the investments we have made together over the last five years.  I wish President Weah and the people of Liberia every success and I thank you for your partnership in this tremendous project.”