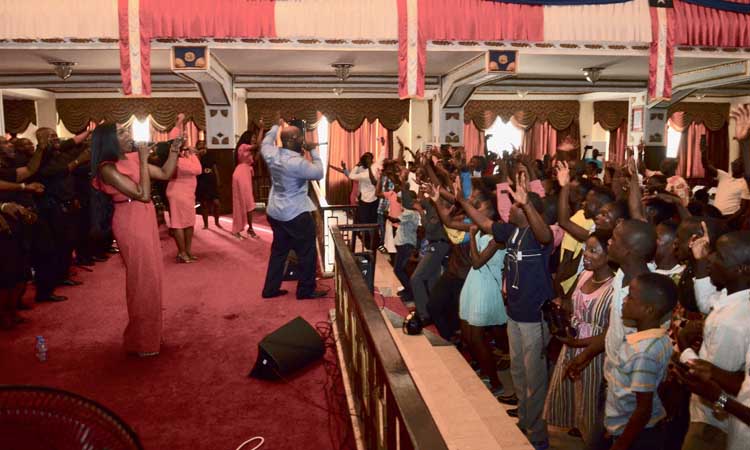 In celebration of African American History, and underscoring the shared American and Liberian appreciation of gospel music, the U.S. Embassy in Monrovia was pleased to host gospel sensations Oscar Williams & The Band of Life for their first visit to Africa.  The highlight of their visit, on Sunday, March 1st was a concert at Centennial Pavilion that was free and open to the public.  An audience of 550 was delighted and inspired by the performance.  The collaborative concert with members of the Monrovia Community Mass Choir and the Sacred Heart Cathedral Choir was broadcast on Facebook live by both KMTV and the U.S. Embassy Facebook page.

Oscar Williams & The Band of Life (OW&BOL) has been a gospel music force in the United States for nearly two decades; their first album Unstoppable, released in 2006, topped the gospel charts.  They have performed, taught, and inspired international audiences on the principles of positive communication and inclusiveness using the genres of gospel, jazz, and the blues as teaching tools, while serving as musical ambassadors for the United States across the globe.

During their visit to Liberia, the band held interfaith workshops at music academies and masterclasses for choirs, conducted a radio interview with ELWA Radio, and gave performances that highlighted the history of gospel and the unique musical connections between the United States and Liberia. At a panel discussion with Liberian musicians, the band discussed the challenges and opportunities of being professional musicians in the digital era and shared their insights on how to manage the pressures for content creation and self-promotion, as well as challenges inherent in a competitive digital world.

Dr. Oscar Williams is an award-winning musician and composer with a Bachelor’s and a Master’s degree in Music Composition and a Doctorate in Educational Leadership and Management.  Through their visit, the band aimed to educate audiences on the historical context of gospel’s origins and its influence on all forms of music; the power that musical exchange has to unite across religions, ethnicities, age, gender and socio-economic background; and the value of musical education in respecting cultural traditions, learning artistic techniques and disciplines, and performing as individuals or with groups.  The band’s singers include C. Ashley Brown-Lawrence, Thelma Hariston and Detraiysha (Tracy) Smith.

Photos of the Centennial Hall performance are available at the below link.  All photos at that link may be re-used with credit to “U.S. Embassy Monrovia.”  https://www.flickr.com/photos/usembassymonrovia/albums/72157713358541001