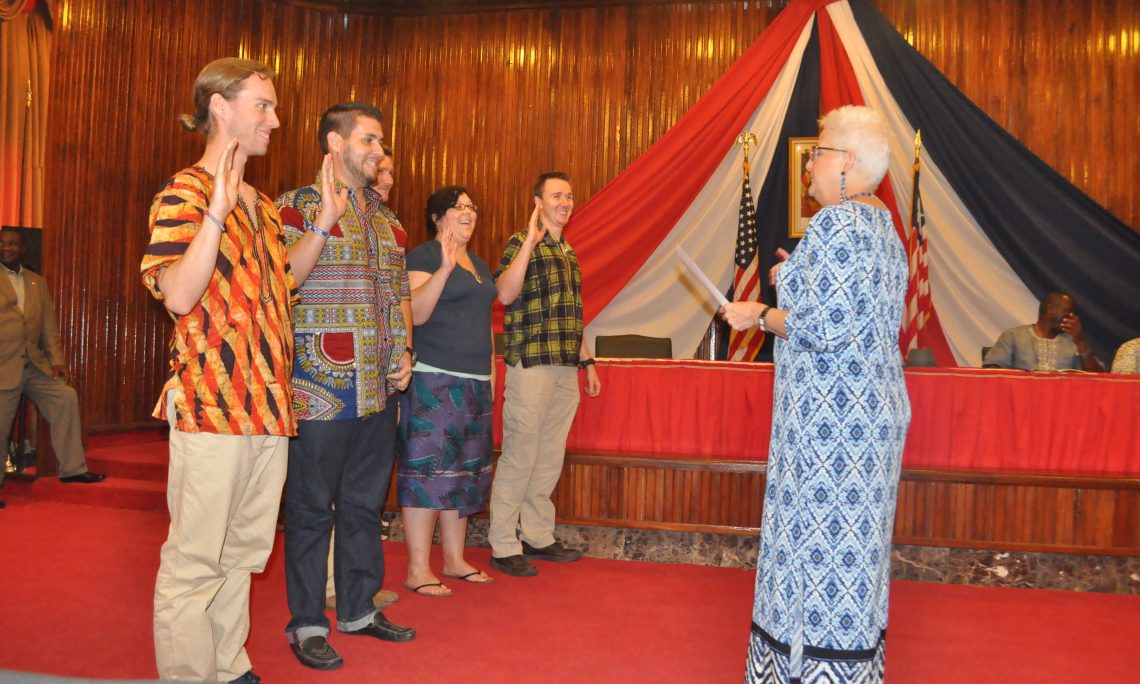 (Monrovia) – U.S. Ambassador Deborah Malac has sworn in the first batch of five Peace Corps Response Volunteers who returned to the country after Liberia was declared Ebola free by the World Health Organization on May 9, 2015.

More than 100 Peace Corps Volunteers were evacuated from Liberia almost a year ago due to the Ebola outbreak.

Speaking at the swearing-in ceremony at the Ministry of Foreign Affairs June 12, Ambassador Malac said she was pleased that the Peace Corps Response Volunteers decided to return to Liberia to continue the legacy between the United States and Liberia.

Ambassador Malac said the Peace Corps expects to expand the number of volunteers in the coming months.

“Volunteers will continue to help students and teachers better employ limited resources, such as libraries, laboratory materials, and learning aids,” Ambassador Malac said.  “And they will begin looking at ways they can help support public health and literacy initiatives. Volunteers also will continue to build Liberian capacity that spans far beyond the classroom, as you all have shown in your commitment to gender equity, food security, malaria prevention, and many, many other initiatives in the past. All of these activities prepare youth to be productive adults and citizens.  The Peace Corps is challenging students to leverage their abilities, communication skills, and decision-making in service to their families and communities.”

Ambassador Malac added:  “Taken together, Peace Corps is not just teaching but educating for life.  Volunteers are creating a foundation for lifelong learning that will serve students in Liberia well for generations.  These five Americans will join the legacy created by more than 4,300 Volunteers who came to Liberia before them.  Indeed, they underscore a growing people-to-people development partnership between our nations that dates back to 1962.”

Vice President Boakai said that maintaining the Peace Corps in Liberia even after half a century shows the need for qualified teachers in the country’s education sector.

He recounted the contributions of the Peace Corps in Liberia from the early 1960s to present and expressed the gratitude of President Ellen Johnson Sirleaf, who was unable to attend the program because she was at the African Union Summit in South Africa.

The five Peace Corps Response Volunteers have been assigned to high schools in Bong and Margibi Counties.