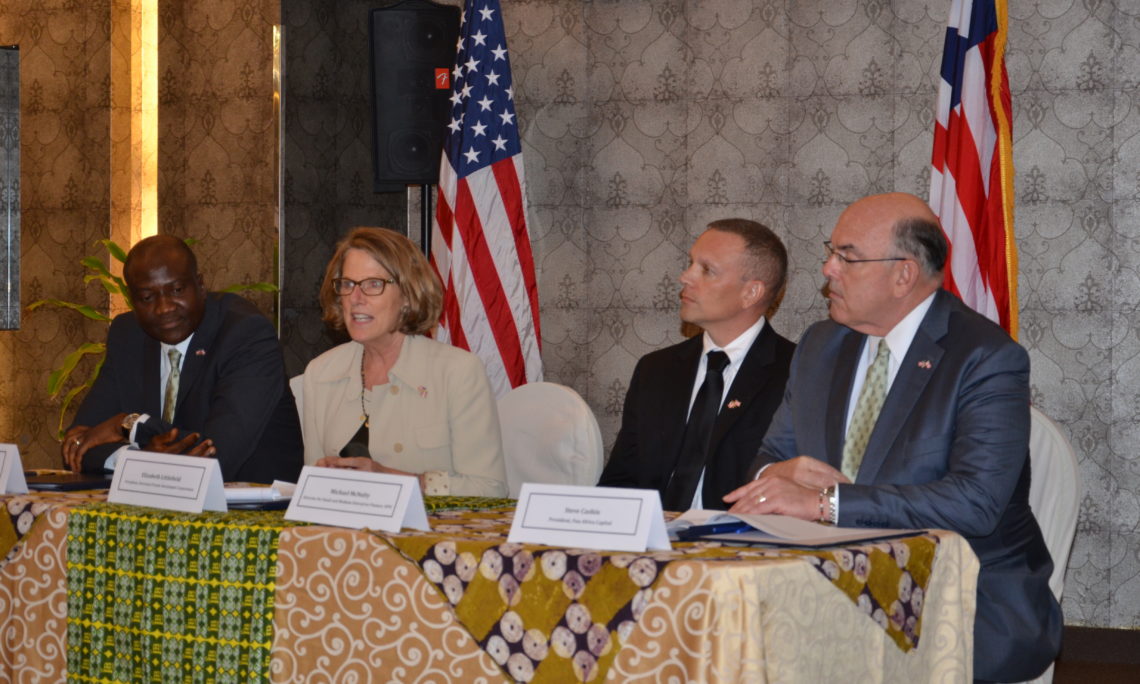 The author is President and CEO of the Overseas Private Investment Corporation, the development finance institution of the United States government.

As you gather to celebrate Liberia’s Independence Day, you have much to be proud of. Your country, battered by the Ebola epidemic during the past two years, has achieved zero active cases and has returned its gaze to the development challenges ahead.  You have demonstrated more than endurance, you have demonstrated resilience, and your optimism is beginning to win the day.

This week, as the head of the U.S. government’s development finance institution—the Overseas Private Investment Corporation (OPIC)—I will be in Liberia with a delegation of business executives to meet with government officials and business leaders so that, together, we can identify commercially viable investments to bring “leap-ahead” technology to Liberia’s economy.

OPIC’s role is to provide long-term loans and risk mitigation to support such investments. Our portfolio in Sub-Saharan Africa has grown by more than $6 billion in recent years. However, that is still too small, and we aim to change that.

We are here foremost to listen and learn, as those who live within an economy invariably have the greatest insight into its needs and potential, and into what needs to be done to attract and keep the private investment that is so essential to job creation.

We are here to stand in solidarity with Liberians—along with the U.S. Government’s Millennium Challenge Corporation, the U.S. Agency for International Development and the Power Africa interagency coalition—to underscore that the future of our two nations will continue to be intertwined. With every step toward further electrification, the foundation for diversifying Liberia’s economy grows stronger. That holds promise for both our nations.

We are here to offer Liberian companies face-to-face access to investors and to provide information about the resources that OPIC and interested investors may be able to share.

Perhaps most important, we are here to help send a message to other investors around the world: Liberia is open for business.

This message is especially critical now, as Liberia is in the midst of transitions on so many fronts: shifting Ebola investments from crisis management to long-term improvements to the nation’s healthcare system, joining the World Trade Organization, drawing down UNMIL and working to ensure a peaceful, democratic presidential election. Further, after the election, Liberia will have to continue improving the strength of government institutions.

Some inherent challenges will persist or be slow to resolve. Other countries will continue to compete for many of the same foreign investors Liberia would want. Such challenges are part of the Liberia story, but they should not obscure the broader case for optimism.

The global population grew by some 500 million over the past seven years. Yet prices for a wide swath of commodities actually decreased. This runs against the fundamentals of supply and demand. As commodity prices rebound, Liberia has the potential to benefit markedly.

Liberia’s political leadership continues to recognize the importance of diversifying the nation’s economy and improving its investment climate. This recognition and long-term direction alone is critical. Far too many African nations have relied on natural resources for too much of their economic activity. Liberia can and, I believe, will begin to see progress in sectors such as agro-processing, manufacturing and eco-tourism in the years ahead.

One of Liberia’s greatest assets, of course, is its human capital—the capital realized, and the capital unrealized. Women have achieved progress in government, the judiciary and other positions of political authority. Yet their economic participation has lagged. Liberia is now finding ways, through vocational and technical instruction, to bring them into sectors such as health care and education. As this happens with small businesses and entrepreneurship, Liberia will thrive all the more.

None of these factors alone will assure Liberia’s economic renaissance. However, aligned together they create a powerful economic ecosystem.

Of particular importance is infrastructure, ranging from power and transportation to water and telecommunications. Many of these sectors have traditionally been the exclusive domain of governments. However, private investment has proven transformative with a small amount of help from development finance agencies such as OPIC. That’s one of the reasons why our investor delegation includes leaders from several infrastructure companies.

OPIC and U.S. investors see economic promise in Liberia. Over the next few days, we will work to begin making that promise into a reality—one that Liberians can capitalize on, and the rest of the world can witness.