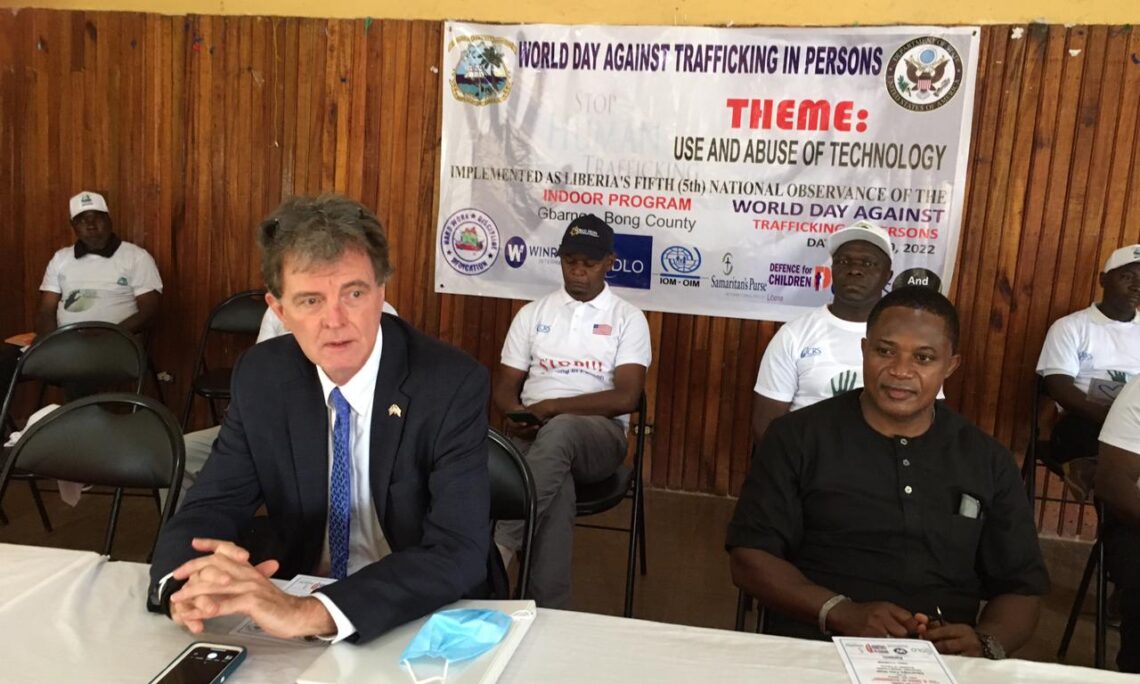 It is an honor to have been invited by Minister Gibson to be here in Gbarnga City Hall for this year’s observance of World Day Against Trafficking in Persons under the theme “Use and Abuse of Technology.”

This is an extraordinarily important topic, and I am proud to represent the U.S. Embassy on this occasion.

Trafficking in persons is a serious crime and a grave violation of human rights. With an estimated 24.9 million victims worldwide at any given time, human traffickers prey on adults and children of all ages, backgrounds, and nationalities, exploiting them for their own profit.

Every year, thousands of men, women and children fall into the hands of traffickers, in their own countries and abroad. Almost every country in the world is affected by trafficking, whether as a country of origin, transit or destination for victims.

[RELEASE OF 2022 TRAFFICKING IN PERSONS REPORT]

While today is necessarily a somber event, given the nature of the crime of trafficking, I am happy to start with good news by recognizing and applauding Liberia’s upgrade to Tier 2 from Tier 2 Watch List in this year’s Trafficking in Persons Report, which was publicly released by U.S. Secretary of State Antony Blinken last week on Tuesday, July 19th.

This is good news not only because it recognizes the important work Liberia has done in this area, but this improvement in its ranking also prevents what would be an automatic downgrade to Tier 3, the lowest tier, which could have resulted in the end of all non-humanitarian and non-trade U.S. assistance to Liberia.

This year’s report, the 22nd annual installment, includes narratives for 188 countries and territories, including the United States.

It is important to note that the TIP Report objectively assesses governments’ efforts – including the U.S.’s – but it is more than just tier rankings. It is, above all else, an instrument of diplomacy—a means to effect positive change and encourage governments to increase and improve their anti-trafficking efforts each year.

The Report remains the “gold standard” in assessing government efforts to combat all forms of human trafficking across the “3P” framework of Prosecution, Protection, and Prevention.

The United States is committed to objectively assessing governments’ efforts to meet the Trafficking Victim Protection Act’s (TVPA) minimum standards and to consistently apply them across the globe.

Each year, the TIP Report’s introduction focuses on target areas.

In this year’s report, the Introduction focuses on the importance of meaningful engagement with trafficking survivors and the role they play in improving and apprising anti-trafficking policies and strategies.

Survivors of human trafficking play a vital role in combating this crime. Their perspective and experiences should be taken into consideration to better address this crime and to craft a better response to it.

This year, while the government of Liberia does not fully meet the minimum standards for the elimination of trafficking, it is making significant efforts to do so.

The government demonstrated overall increasing efforts compared with the previous reporting period, considering the impact of the COVID-19 pandemic on its anti-trafficking capacity; therefore, Liberia was upgraded to Tier 2.

During this past reporting period, the Liberian Government passed and enacted a new trafficking law with provisions that removed the elements of force, fraud or coercion for child sex trafficking crimes.

The Liberia National Police established a new anti-trafficking unit, and, for the first time, the Ministry of Labor hired lawyers dedicated to prosecuting trafficking cases.

But, I want to reiterate that the battle against trafficking in persons, or modern-day slavery, must continue – in Liberia, in the United States, and in every country.

Trafficking in persons persists and it is pervasive.

There are trafficking victims in Liberia who would be surprised to hear that Liberia’s ranking has improved. The fight must continue for these victims that have yet to see any improvement.

We must not rest on our laurels by relying on previous successes to carry this fight forward. Only continued and expanded efforts to fight against the TIP scourge will prevent another downgrade next year to Tier 2 Watch List.

That, unfortunately, has already occurred several times for Liberia, and that pattern can make it harder to climb back up to Tier 2 or achieve Tier 1 status.

We encourage the government to continue building on its progress over the last year and focus efforts on expanding capacity for shelter and victim protection services and provide more resources and training to law enforcement officials so they can effectively investigate and prosecute trafficking crimes.

One way to help advance progress is through meaningful engagement with trafficking survivors, which is a focus of the 2022 TIP Report. Trafficking survivors can play an important role in improving and appraising anti-trafficking policies and strategies. Their perspectives and experiences should be taken into consideration to better address this crime and to craft a better response to it.

The other great news that I want to celebrate with you is the recognition of Judge Cornelius Flomo Wennah as one of this year’s TIP Report Heroes – one of six in the world and the only one in Africa. Judge Wennah’s efforts to hold traffickers accountable both through his current work as a judge and his previous work as head of the Felonious Crimes division and as a prosecutor in the Ministry of Justice were recognized by Secretary of State Antony Blinken during event releasing the 2022 TIP Report.

Prior to this position, he was Head of Felonious Crimes and a prosecutor in the Ministry of Justice (MOJ), investigating, prosecuting, and advising on TIP matters and other crimes. He is distinguished for being a TIP training curriculum developer and trainer country-wide on a project funded by the U.S. Embassy’s Bureau of International Narcotics and Law Enforcement Affairs (INL).

In his last four years as prosecutor, he prosecuted seven TIP cases, winning five and losing one, with one remaining under appeal. These numbers are significant given Liberia’s overall low number of TIP cases prosecuted in the past few years. Judge Wennah has also advocated for the inclusion of traditional leaders and civil society organizations in Liberia’s National Anti-Trafficking Task Force.

Since 2020, Judge Wennah has assisted the International Development Law Organization on an INL-funded project to develop international-standard-level TIP training curriculum for judges, prosecutors, and law enforcement personnel, all to raise awareness and develop and strengthen justice sector actors’ capacities to prevent and fight TIP crime.

Through the State Department’s premier professional exchange program, the International Visitor’s Leadership Program, Judge Wennah is recently visited Washington DC to be recognized for his efforts and believes that this TIP Hero award will serve as an impetus to help his fight against human trafficking in Liberia.

[USE AND ABUSE OF TECHNOLOGY]

The theme for this year’s World Day Against Trafficking in Persons is “Use and Abuse of Technology,” highlighting technology’s ability to both enable and impede human trafficking.

With the global expansion in the use of technology — intensified by the COVID-19 pandemic and the shift of our everyday life to online platforms — the crime of human trafficking has also expanded into cyber space.

The internet and digital platforms offer traffickers numerous tools to recruit, exploit, and control victims; organize their transport and accommodation; advertise victims and reach out to potential clients; communicate among perpetrators; and hide criminal proceeds – and all that with greater speed, cost-effectiveness and anonymity.

Crisis situations can also intensify this problem. Criminals profit from the chaos, desperation, and separation of people – particularly women and children – from support systems and family members.
For people on the move, online resources can become a trap, especially when it comes to phony travel arrangements and fake job offers targeting vulnerable groups.

However, in the use of technology also lies great opportunity.
Technological solutions to date include mobile apps that help identify victims of sex trafficking; satellite imagery that tracks down fishing vessels carrying victims of forced labor; and web scraping tools that aggregate child abuse images to help law enforcement track down children in need of help.

Future success in eradicating human trafficking will depend on how law enforcement, criminal justice systems, and other authorities can leverage technology in their responses, including by aiding investigations to shed light on how trafficking networks operate and providing support services to survivors.

Prevention and awareness-raising activities on the safe use of the internet and social media could help mitigate the risk of people falling victim of trafficking online.
Cooperation with the private sector is important to harness innovation and expertise for the development of sustainable technology-based solutions to support prevention and combatting of human trafficking.

The purpose of the module is to improve TIP-related data collection and usage, as well as facilitate the prosecution of TIP incidents by providing timely information on cases for reporting and decision-making. The TIP module will allow the National Trafficking in Persons Taskforce and law enforcement agencies to report TIP incidents as they are identified, upload relevant information about the case as it progresses, and track the status of each case throughout its lifecycle. The TIP module will also allow policy makers and TIP stakeholders to access summary reports on TIP cases reported in the system.

But here is the key message: we can all get involved in fighting trafficking by being vigilant online and reporting suspicious websites, social media pages, or activities to the authorities.

Let’s all join together in eradicating the scourge of modern-day slavery and make everyday World Day Against Trafficking in Persons!