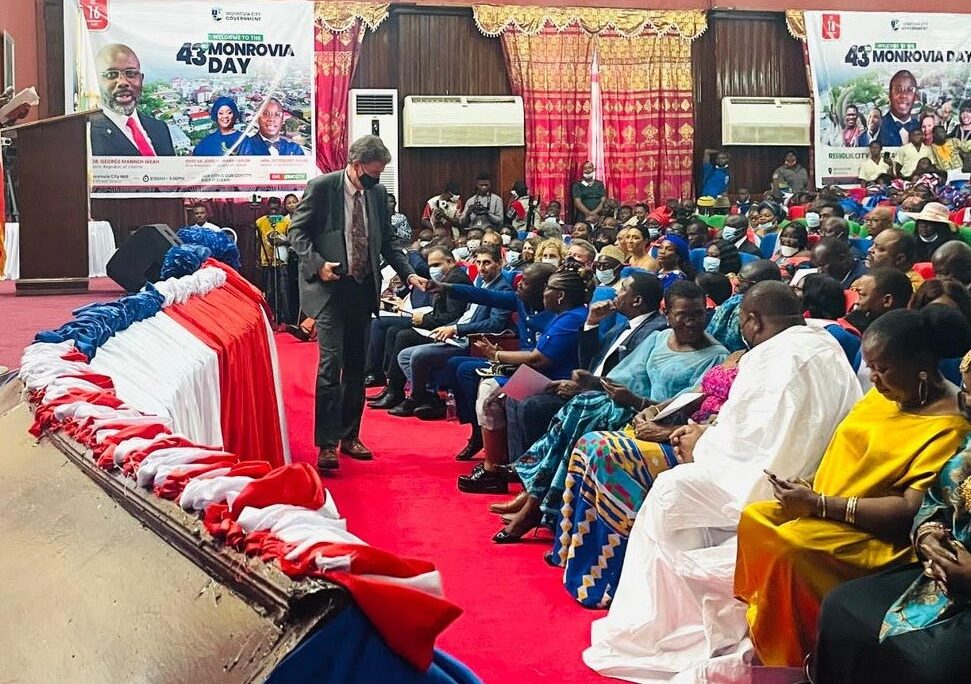 Yesterday, February 16, 2022, U.S. Embassy Monrovia’s Deputy Chief of Mission Joel Maybury delivered remarks at the 43rd Monrovia Day celebrations at Monrovia City Hall.  Mayor Jefferson Koijee gave his annual state of the city address and hosted mayors from Accra, Freetown, and other cities, including the virtual attendance of the mayor of Salisbury, North Carolina, U.S.A., that has adopted a resolution supporting a sister-city relationship with Monrovia, Naquetta Ricks of the Colorado House of Representatives, and Nathan Biah of the Rhode Island House of Representatives.  DCM Maybury spoke about the historical connection between Monrovia and the United States, the great potential the city has as a tourist destination – especially with the establishment of a “historic quarter” –  and the importance of partnerships and coalitions in bringing future plans to fruition.

I am genuinely honored to have been invited to celebrate the 43rd edition of Monrovia Day with all of you today.

I want to acknowledge you, Mayor Koijee, the City Council, and all the city employees who put in a lot of effort to organize this year’s “Monrovia Day.”  I say that because I know that Liberia – and Monrovia in particular – has been very busy organizing major events in January and February to commemorate the Bicentennial of the arrival of the first Black Americans to this land.  Each of these events has been a huge undertaking and I want you to know how much the members of our Presidential Delegation from the United States who were here on Monday, as well as my Embassy colleagues who call Monrovia home, appreciated your efforts.

The focus of my remarks today will be on the relationship between Monrovia and the United States.  I wanted to say a few words about history because we are in this bicentennial year.  And then I’ll talk about the present and the future.

It seems to me that one obvious place to start is with the name Monrovia.

When those first immigrants from the United States settled on this land, they decided to honor President James Monroe by naming their new city after him.  After all, it was James Monroe who had supported the American Colonization Society’s plan to resettle Black Americans in Africa and he was also an ardent supporter of ending the transatlantic slave trade.

Historians at the University of Mary Washington in Virginia have letters and contemporary newspapers written from “Monrovia” as early as May 1823.

The American Colonization Society acknowledged Monroe’s support at its February 20, 1824, meeting when it passed a resolution naming the main town of the settlement Monrovia.  In fact, it was Robert Goodloe Harper who made the formal proposal of the names Monrovia and Liberia.

Just so you all know, Mayor Koijee and I talk a lot about history and specifically the history of Monrovia.  For this Bicentennial year, we have talked about the potential for Monrovia to develop its tourism in a bid to attract international and Liberian tourists.

He and I have discussed the idea of creating a “historic quarter” in downtown Monrovia, a tourist zone like the ones we have seen in other cities around the world.  Picture street signs that would clearly designate the “historic quarter” and plaques that identify heritage sites.

The “historic quarter” would include Joseph Jenkins Roberts’ executive mansion, that red-brick structure on Ashmun Street that houses the National Library.  Another landmark is the executive mansion that served as the Liberian president’s quarters until the early 1960s.  It’s still sitting at the corner of Ashmun and Randall streets along with the elephant statue.

Let’s not forget the National Museum that once housed the country’s legislature, the Centennial Pavilion built in 1947, and President Tubman’s tomb, all located in the same square block bordered by Ashmun, Buchanan, Broad, and Center streets.

Speaking of Center Street, the venerable Palm Grove Cemetery, very likely in existence since the 1820s, is four blocks south from these sites.  I think we can all agree that Palm Grove Cemetery deserves to be restored and protected so that it can once again become a place for people to go to pay their respects to loved ones, and, as with other historical cemeteries the world over, attract tourists and those who are passionate about history.

Up on Ducor Hill stands the J.J. Roberts Monument with its fabulous bas-relief telling the story of Liberia’s evolution.  Up on the same hill, one can see the skeleton of the abandoned luxury Ducor Hotel that once attracted conventions and tourists from around the globe, an old lighthouse that once guided ships into the Port of Monrovia, and the remains of Fort Norris, Liberia’s first defense of Monrovia in the nineteenth century.

Also not too far away from the historic downtown in the middle of the Mesurado River is Providence Island where those first American immigrants set foot on January 7, 1822.

For me to say any more about historic sites would require more time than we have here today.  But I would be remiss if I did not mention that in Logan Town on Bushrod Island, it is possible to see the tomb of Zolu Doma, also known as King Peter, ruler of the Dei ethnic group and another important historical figure when we talk about events in Liberia 200 years ago.

The point I’m really trying to make here is that Monrovia has huge potential as a tourist destination, and the older generations in the audience know just how attractive Monrovia was when they were children and young adults.

So what about the present and the future of this city?  We can all go out and catalog the challenges of a city built for a few thousand that is now trying to serve the needs of more than one million.  We have all endured the traffic congestion, noted the infrastructure deficiencies, grumbled about the litter, unsanitary conditions, and dilapidated buildings, empathized with those who live with chronic unemployment, drug addiction, poverty, and despair.

But is that all we’re going to do, complain?

No, of course not.  You know what we should do?  As international donors and your partners who care about this city and its population, we should join forces.

Many of us come from countries and have visited countries with vast experience in breathing new life into dying and decaying neighborhoods and cities.  We know that these are sometimes massive undertakings, but they are both possible and necessary undertakings.  Such efforts to rehabilitate a city, select neighborhoods, or streets require financial resources, legal mechanisms, and – crucially – ethical and responsible governance, but initially they require political will and a vision.

Every mayor I have ever met in my work as a diplomat in different parts of the world and back in the United States has had a vision and has had to overcome all sorts of obstacles to achieve that vision.  Monrovia, and Mayor Jefferson Koijee, are no different.

You, Monrovia’s leaders, know the issues confronting your city better than anyone else.  You drive the streets, and you walk the neighborhoods.  You sit in coffee shops and take the pulse of the capital city.  You hear the citizens’ complaints.  But let’s be fair.  There is much good about Monrovia.

As donors, we generally try our best to align our strategic priorities with those of the Liberian government, and speaking for the United States, I am proud to say that my USAID colleagues have been in multiple discussions with Monrovia City Council officials to align some of our priorities with yours.

Together, the Monrovia City Council and USAID are exploring urban youth activities, government decentralization and agribusiness project designs, and water, sanitation and hygiene trainings, to name a few of the areas.

That’s what it is going to take.  We can identify challenges together, and where possible, identify the resources that will be needed to overcome the challenges.

To do this, we should mobilize as broad a coalition of stakeholders as possible – community groups, the private sector, international donors, Liberians in the Diaspora, Monrovia’s Sister Cities like Dayton, Ohio, and the Liberian and Monrovia governments.  I understand there is another Sister City relationship in the works with Salisbury, North Carolina, home to Livingstone College that gives two scholarships to Liberian students every four years.

I know this all sounds like it is going to need some serious collaboration and coordination.  Well, here again the city and its various partners can step up and decide who can do what.

Honorable Mayor, I am sure you have heard the phrase “scarce resources” more times than you care to admit.  But I assure you, there is no scarcity of ideas for how to make Monrovia stronger than it has ever been.

What we all need to do is put all our good ideas on the table, make sure they are married with your vision, make sure they align with our respective strategic priorities, and then work creatively to identify the resources that will be needed to implement the vision.

But let us not forget the old adage, “Rome wasn’t built in a day.”

Thank you again for inviting me here today.