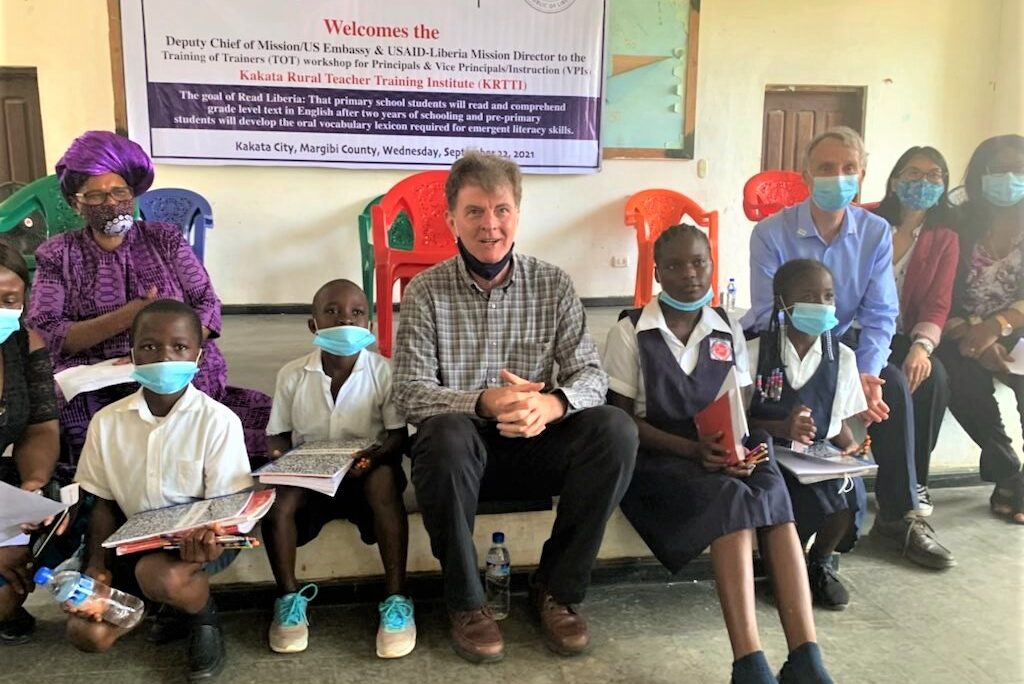 Throughout the visit, the U.S. delegation highlighted the COVID-19 vaccination campaign and encouraged all leaders and institutions to emphasize the importance of vaccination to protect the population against COVID-19.  Dr. Rachel Idowu, country director of the U.S. Centers for Disease Control and Prevention (CDC), joined DCM Maybury and Director Wright at Phebe Hospital to deliver this message.  Vaccinating people against COVID-19 is a top priority for the United States Government, which provided Liberia over 300,000 doses of the J&J vaccine via COVAX and in coordination with the Africa Union and the Africa Centres for Disease Control and Prevention.

The U.S. Embassy delegation made its first stop in Margibi at the Kakata Rural Teacher Training Institute to observe a training of school principals and vice principals under the USAID-funded Read Liberia activity. This training is part of a phased transition of the improved early grade reading model from USAID support to full ownership by the Ministry of Education.

In Bong, DCM Maybury and his team visited various institutions that will benefit from the USAID-funded Ganta-Gbarnga Grid Extension project, including Cuttington University and Phebe Hospital.  It will provide more than 2,000 households, local businesses, and various institutions in the Suakoko area access to reliable and affordable electric power.

The U.S. Embassy delegation also toured the Bong County Service Center in Gbarnga.  As in all other counties, the center provides citizens with important government documents and services, such as marriage and birth certificates, business permits, and land deed registration.  Before the establishment of the county service centers, people in all 15 counties had to travel to Monrovia for these documents and services.

In Nimba, DCM Maybury and Director Wright toured the Sanniquellie Water Treatment Facility, one of three urban water treatment plants rehabilitated and constructed with USAID support to provide more than 30,000 Liberians access to safe drinking water.  The other two plants are in Robertsport, Grand Cape Mount County, and Voinjama, Lofa County.  In addition to visiting the water treatment plant, they observed ongoing work to expand water distribution to Sanniquellie residents by connecting private homes and businesses to the main pipelines.

From Sanniquellie, the team traveled to Karnplay, also in Nimba, to visit local clinics benefiting from various USAID-funded activities, including the construction of a water tower and distribution network, a solar electrical system, and water, sanitation, and health (WASH) facilities.

DCM Maybury said he was inspired by the many conversations he had with local officials, community leaders, and other Liberians in Margibi, Nimba, and Bong.  He remarked how important it is to “further strengthen the enduring partnership between the United States and Liberia and ensure local ownership and long-term sustainability” of U.S.-supported development activities in the three counties.