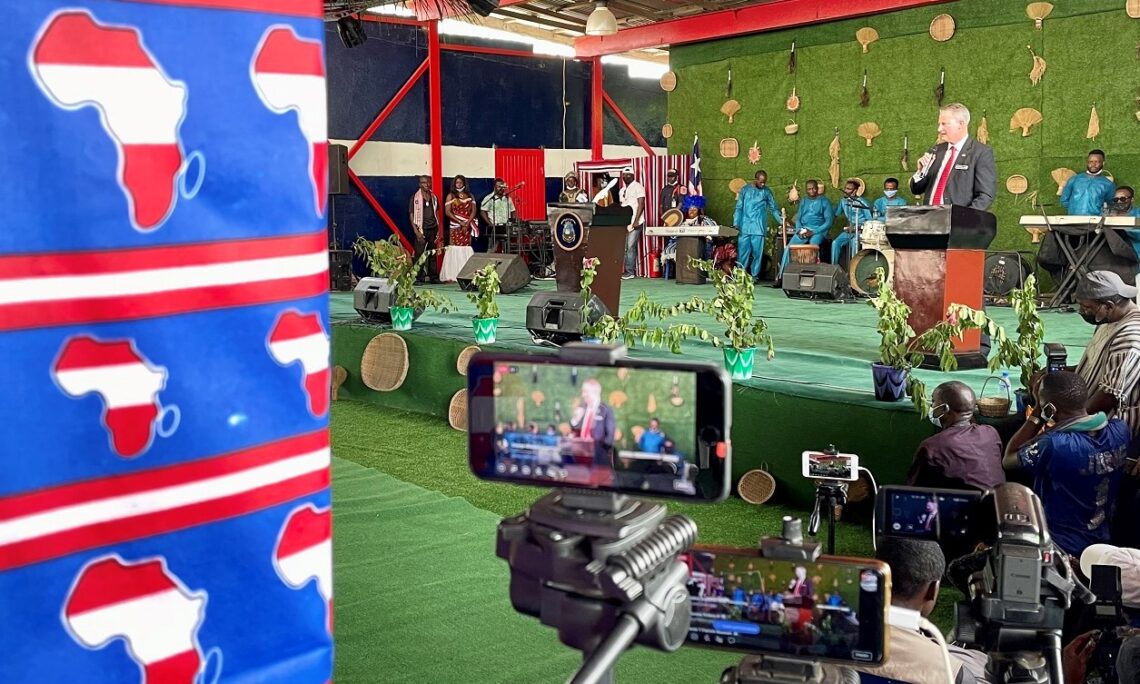 The landing of January 7, 1822, led to the establishment of the city of Monrovia and, in 1847, the Republic of Liberia.  Today, the United States and Liberia are two of the oldest continuous republics in the world and share a unique history paired with common democratic values.

The arrival of Black Americans 200 years ago represents just one part of the rich Liberian story though.  Together, the communities of Kpelle, Bassa, Mano, Gio, Kru, Grebo, Krahn, Vai, Gola, Mandinka, Mende, Kissi, Gbandi, Loma, Dei, Belleh, and American and Barbadian immigrants, including people of different faiths, form what today is the dynamic Liberian culture.

Anniversaries create opportunities for reflection and renewal.  Today, we acknowledge the oppressive conditions that led Black Americans in the 19th century to seek a new beginning in West Africa.  We must live with this history and learn from it.  So, we use this moment to recommit to an inclusive and representative democracy.  One, that by its nature, is a constant work in progress.

We hope all Liberians, as our longtime friends, join us in this commitment to always work toward a society that benefits all.  As Ambassador McCarthy concluded in his remarks on Providence Island, “Together, we have a lot to be proud of.  And we have a lot to look forward to as we prepare the next generations for their turn to lead our great countries.”

Please see below for more photos from the event.

I would like to begin by expressing how much of an honor it is to be standing here – on Providence Island – exactly 200 years after the first wave of free Black Americans arrived at this hallowed location.

There have been so many incredible individuals over the last 200 years who built the relationship between the United States and Liberia.  I am humbled to be the one to mark this historic day on behalf of my government.

We should pause to remember all those who made sacrifices, whether newcomers to this land or indigenous people.

We should also acknowledge that this is a nation of people drawn from many roots.

And we should celebrate the fact that one of Liberia’s treasures is its tremendous diversity.

I arrived in Liberia one year ago yesterday.  What an incredible year!  And that is despite our ongoing efforts to stop the spread of and protect all people from COVID-19.

Our shoulder-to-shoulder efforts with the Ministry of Health and many others has led to the vaccination of more than one million Liberians.  That is worth celebrating, but it is not a number to be satisfied with.

It is essential to create a safe environment for members of the Liberian diaspora and other visitors who are expected to visit during this momentous year. We all want this pandemic to be over.  Let’s continue and ramp up our joint efforts!

And looking beyond 2022, we can work together to make Liberia more attractive to both visitors and investors alike.

There is such a compelling story to tell.  One that we should not forget is rooted in Liberia’s unique journey as a democracy.

We like to say that democracies, by their nature, are a constant work in progress.

In 1822, the American democracy, while ambitious, was not yet a fair society.  Slavery would not be abolished for another four decades.  And free Black Americans, while nominally citizens, did not yet enjoy the civil rights they were promised by our Constitution.

So, it should not be a surprise that, in 1820, 86 free Black Americans chose to board a ship sailing for a new life in West Africa.

To think, 200 years ago today, some of that original group along with others that followed in their footsteps established a settlement right here on Dozoa Island.

Consider the bravery and hope of those individuals – men, women, and children – to embark on something as ambitious as creating a new country.  It is inspiring, to say the least.

But also remember the challenging circumstances that led to such a leap of faith.

As we commemorate this anniversary, we believe it is important to have a robust, scholarly debate about the historical decisions and actions taken by our ancestors, so as to inform future generations and bring about a mutual understanding of what happened and, importantly, why it happened.

We must live with this history and learn from it.

200 years later, American democracy is still not perfect, but it is undoubtedly fairer, and our place in the world is due to its resiliency and adaptability.

We have generations of similarly ambitious, brave, and hopeful Americans to thank for it.

Liberia – like the United States, like every country – has both a difficult past and many generations of citizens who tried to correct those previous wrongs, creating what we believe is a better nation today.

Not every country, however, has a physical space as emblematic of its history as Providence Island.  As Dr. William Allen, the chair of the Historical Society of Liberia, put it: “[Providence Island] epitomizes not only a pivotal moment of Black nation-building and sovereignty, but a critical space of conflict and cooperation between indigenous Liberians and peoples of African descent previously separated by an ocean for many generations.”

Look around.  Take a moment and consider the 200-year experience between those that were already in this territory – the Kpelle, the Bassa, the Mano, the Gio, the Kru, the Grebo, the Krahn, the Vai, the Gola, the Mandinka, the Mende, the Kissi, the Gbandi, the Loma, the Dei, the Belleh, including people of multiple different faiths – and those that came here: the Americans and Barbadians and their descendants.

We represent two of the oldest continuous republics in the world.  And we share a unique history paired with common democratic values.

The first president of Liberia, President J.J. Roberts, was born in Norfolk, Virginia, the son of two free Americans, and moved to Monrovia at age 20.

The second president, President Stephen Allen Benson, was born in Cambridge, Maryland, the son of freeborn African American parents.  He arrived soon after the first settlement was established in 1822 when he was only 8 years old.

Presidents Alfred Russell and William Coleman were from Kentucky; President Edward Roye was born in Ohio; and President James Smith was from South Carolina.

Our shared history is literally written into the geography, from Monrovia to Maryland County to cities in between, such as Buchanan – named after the cousin of U.S. President James Buchanan – Greenville – named for a Mississippi Delta planter – and Harper – named after a U.S. senator.  Bushrod Island is named after the favorite nephew of George Washington!

Today, our collective goal is the same as it was 200 years ago: a prosperous and self-reliant Liberia.

And we know that the path to that ambition is through a commitment to democracy that ensures every voice is heard, a commitment to rule of law that supports freedom and investment, and a commitment to the Liberian people themselves – their health, education, and other needs.

Just weeks ago, our two presidents joined with other democratic leaders to demonstrate this commitment for the first installment of the Summit for Democracy.

Both President Biden and President Weah pledged to a series of interventions in each of our respective countries to defend against authoritarianism, address and fight corruption, and promote respect for human rights.

A year from now, we will gather again to review the progress of these initiatives.

Here, in Liberia, the United States Government is one year into our long-term collaboration with the Ministry of Information, Cultural Affairs and Tourism; World Monuments Fund; and the University of Virginia on ways to preserve and reuse this very island for future generations.

Extending beyond Providence Island, I urge you all to consider establishing a “historic quarter” consisting of the Palm Grove Cemetery, President Roberts’s executive mansion and other preserved government buildings on Ashmun Street, and the historical churches, and allocating the resources for preservation, beautification, and identification of these landmarks and the neighborhoods that connect them.

This area has the potential to attract visitors from across the world and spark a boom in the tourism economy.

And most importantly, it ensures the next generations of Liberians are well-informed and proud of our one-of-a-kind shared history.

In closing, I would like to quote Liberian author Cyrus L. Gray, Jr., who wrote three years ago, “Although Liberia today is not the same as the Liberia in 1847, “The Love of Liberty Brought Us Here” is still a fitting synopsis of the purpose of Liberia, if we establish some context.  Liberia still clings to its name, paraphrased “Land of the Free,” without reservation from any sector of society.  “Us” in the maxim denotes the collective estates of all blacks and “here” represents the Black Nation, in contrast to a place.  By this definition, the “love of liberty” brought all black people under the umbrella of the first African nation-state, in an era of western domination.”

Our preservation initiatives and our joint year of action to renew our democracies is a worthy tribute to recognizing the ambitions of our forefathers and foremothers, each of whom envisioned a republic based on the inherent power of its people.

These commitments celebrate all we are going to achieve in the next 200 years while recognizing both the dreams as well as the sacrifices and missteps of the last 200 years.

Thank you once again for the opportunity to speak before you on this historic day.