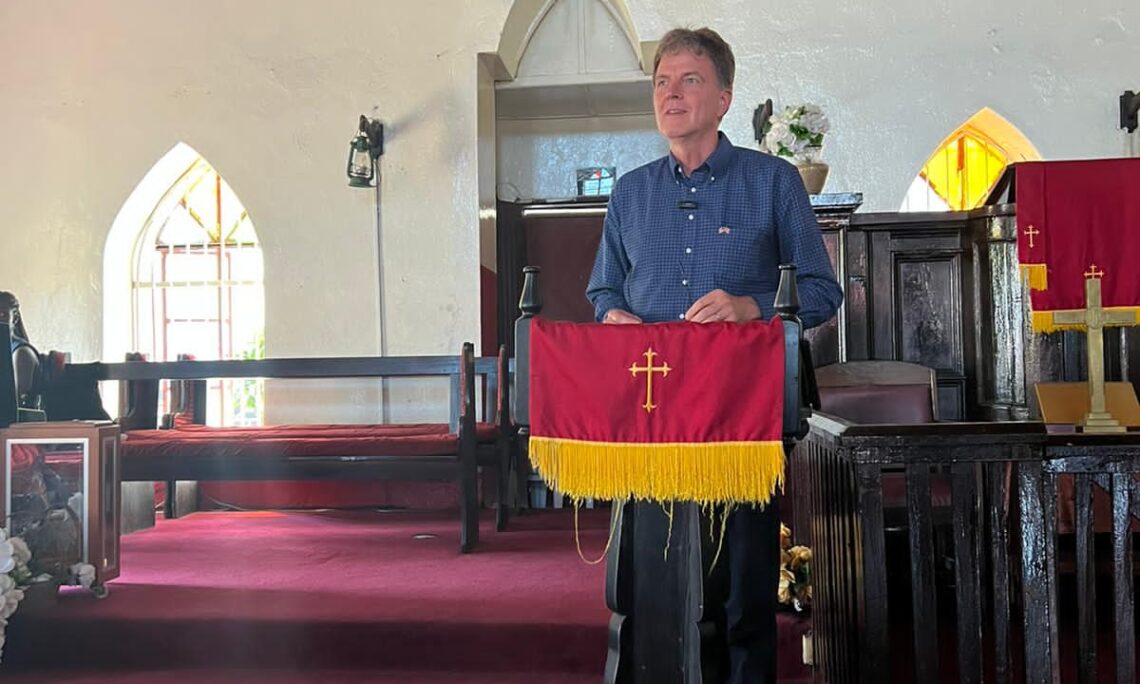 I am honored, but mostly humbled, to be with you today to speak about the significance of Juneteenth.  I say this because I’m standing in this hallowed place where the first generation of freed Black Americans who came to these shores on January 7, 1822 gathered to worship.  Those men, women, and children arrived in the land that came to be known as Liberia almost a full 41 years before the Emancipation Proclamation.

On January 1, 1863, the Emancipation Proclamation came into effect and declared enslaved people in the Confederacy free.  But there was a condition and that was that the Union win the war.  Or as a recent article about Juneteenth in National Geographic put it, “the proclamation turned the war into a fight for freedom and by the end of the war 200,000 Black soldiers had joined the fight, spreading news of freedom as they fought their way through the South.”

As you no doubt know, the state of Texas was one of the last strongholds of the South, and as a result emancipation would take longer there.  In fact, when the last battle of the Civil War was fought in 1865, it is believed that many enslaved people still did not know they were free.

It was not until Union General Gordon Granger arrived in Galveston, Texas on June 19, 1865 and announced that President Lincoln had issued a proclamation freeing them that some 250,000 enslaved people learned of their freedom.

These were the words of Granger that day: “The people of Texas are informed that, in accordance with a proclamation from the Executive of the United States, all slaves are free.  This involves an absolute equality of personal rights and rights of property between former masters and slaves, and the connection heretofore existing between them becomes that between employer and hired labor.”

We know that early Juneteenth celebrations included church services, public readings of the Emancipation Proclamation, and social events like rodeos and dances.  Today Juneteenth is celebrated with food and community.

In 1980, Texas became the first state to recognize June 19 as a state holiday, and today Juneteenth is recognized by nearly every state.  Juneteenth continued to gain awareness as activists have pushed for state and federal recognition.

In June 2021, the U.S. Congress passed a bill to make Juneteenth a federal holiday.  With the signing of the bill by President Biden, Juneteenth became the first new federal holiday since the establishment of Martin Luther King Jr. Day in 1983.

Secretary of State Antony Blinken wrote State Department employees last week saying that Juneteenth isn’t only observed as the day slavery effectively ended in the United States, “more broadly, it’s a celebration of Black culture, and a reminder to all Americans that our nation’s journey toward equality has been long, often painful, and is still incomplete.”

At the State Department, Blinken added, “we take seriously our responsibility to do the work of building a more just and equitable world.”  Desiree Cormier Smith was sworn in last week as the State Department’s first Special Representative for Racial Equality and Justice.  She will lead our work worldwide to protect and advance the human rights of people belonging to marginalized social and ethnic communities and to combat systemic racism, discrimination, and xenophobia.

Before I conclude, let me tell you about a man, an abolitionist and a diplomat, who was laid to rest here in February 1882 after serving just two months as the head of the U.S. Legation, or what later became the U.S. Embassy.

His name was Henry Highland Garnet.  He was born into slavery in Maryland in 1815, escaped from slavery with his parents and they settled in New York.  He would go on to become a pastor and an outspoken abolitionist.  In 1843 he became nationally prominent when he delivered an address at the National Negro Convention meeting in Buffalo, urging the slaves to rebel and claim their own freedom.

On February 12, 1865, he preached a sermon in the U.S. House of Representatives, the first time an African American had made a presentation in the Capitol Building.  It was on the occasion of Congress’ passage of the Thirteenth Amendment, ending slavery.

Here is an excerpt of his address, entitled “Let the Monster Perish:”  “What is slavery? Too well do I know what it is.  I will present to you a bird’s eye view of it; and it shall be no fancy picture, but one that is sketched by painful experience.  I was born among the cherished institutions of slavery.  My earliest recollections are clouded with its wrongs.  The first sight that met my eyes was a Christian mother enslaved by professed Christians, but, thank God, now a saint in heaven.  The first sounds that startled my ear, and sent a shudder through my soul, were the cracking of the whip, and the clanking of chains.”

Toward the end of his speech, Garnet had this to say about the abolition of slavery, “Upon the total and complete destruction of this accursed sin depends the safety and perpetuity of our Republic and its excellent institutions.  Let slavery die.  It has had a long and fair trial.  God himself has pleaded against it. The enlightened nations of the earth have condemned it. Its death warrant is signed by God and man.  Do not commute its sentence. Give it no respite, but let it be ignominiously executed.”