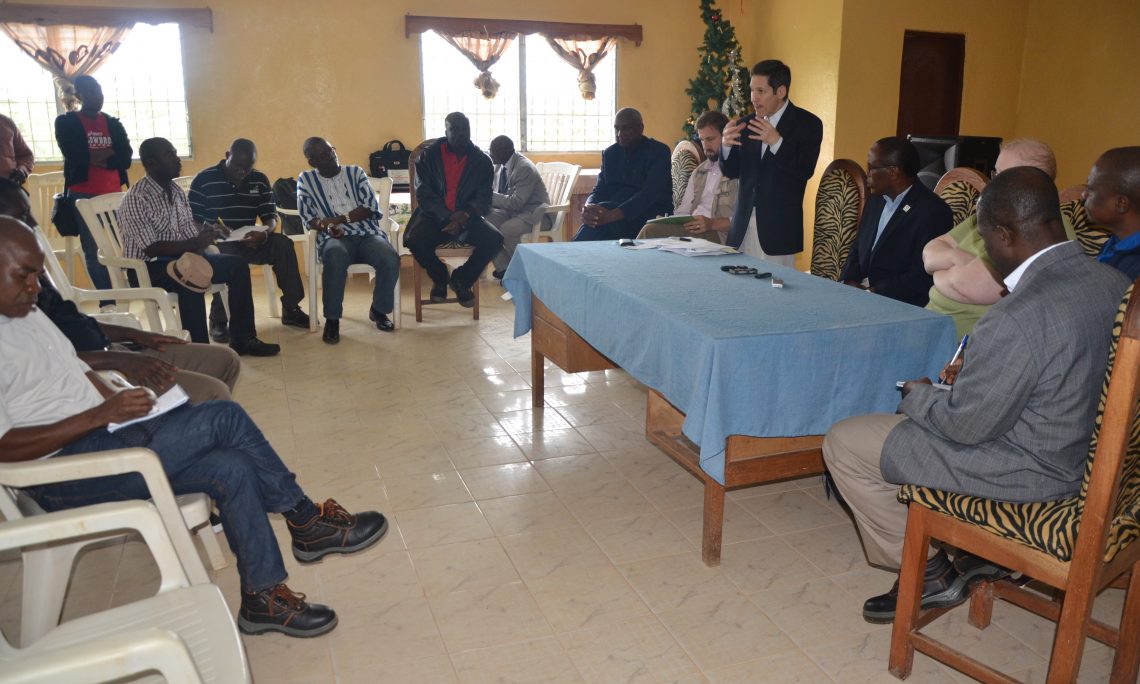 The Director of the Centers for Disease Control and Prevention, Dr. Tom Frieden, traveled to Liberia, Sierra Leone and Guinea in December 2014 to determine how the West African countries are doing in the fight against Ebola and what further measures need to be taken to eradicate the epidemic.

“I am here to try to understand the situation better,” he told journalists in Liberia last month. “What the needs are and what we need most to ‘get to zero’ and how we can build a system that is stronger in the face of Ebola or other infectious disease threats.”

Dr. Frieden was accompanied on his visit to the region December 18-19 by Dr. Stuart Nichol, Chief of CDC’s Viral Special Pathogens Branch.  Dr. Frieden made his first assessment trip to West Africa in August at the height of the second Ebola outbreak.

U.S. Ambassador Deborah R. Malac accompanied him on his most recent trip to Liberia for an inspection tour of the Ebola Treatment Unit (ETU) in Bong County.  In addition to visiting with members of International Medical Corps, the organization that operates the ETU, Dr. Frieden spoke to several Ebola survivors who had successfully been treated there. “We will go where Ebola is,” he reassured one survivor. “Until [Ebola] is gone from West Africa, no country or community is safe,” he said.

The delegation also visited a safe burial site, as well as a U.S. Navy testing lab, where technicians test samples to determine whether a patient has the Ebola virus.

“There’s been a lot of progress in the response,” Dr. Frieden observed. “I do believe it will be possible to get to zero (cases) but it’s going to take a lot of hard work and not relaxing our grip.”

Liberian President Ellen Johnson Sirleaf met with Dr. Frieden and expressed her gratitude for the role CDC has played in the international effort against the Ebola virus.  She emphasized that the focus is now changing from one of treatment to prevention.  They also discussed the need for strengthening Liberia’s healthcare system with particular focus on implementation of strong infection control measures.

Dr. Frieden also met with representatives of the United Nations and various NGO organizations, and was briefed by CDC’s Liberia team on the challenges of contact tracing, infection prevention and control and dignified burial management.

The CDC Director visited Liberia in August when, as he described it, “the situation was horrific and unfortunately, we knew it was going to get worse.”  “There has been a dramatic improvement in the level of response,” he acknowledged. “There’s been a big decrease in the number of cases.”  But he warned:  “We still are nowhere near out of the woods. We still have a long way to go.”