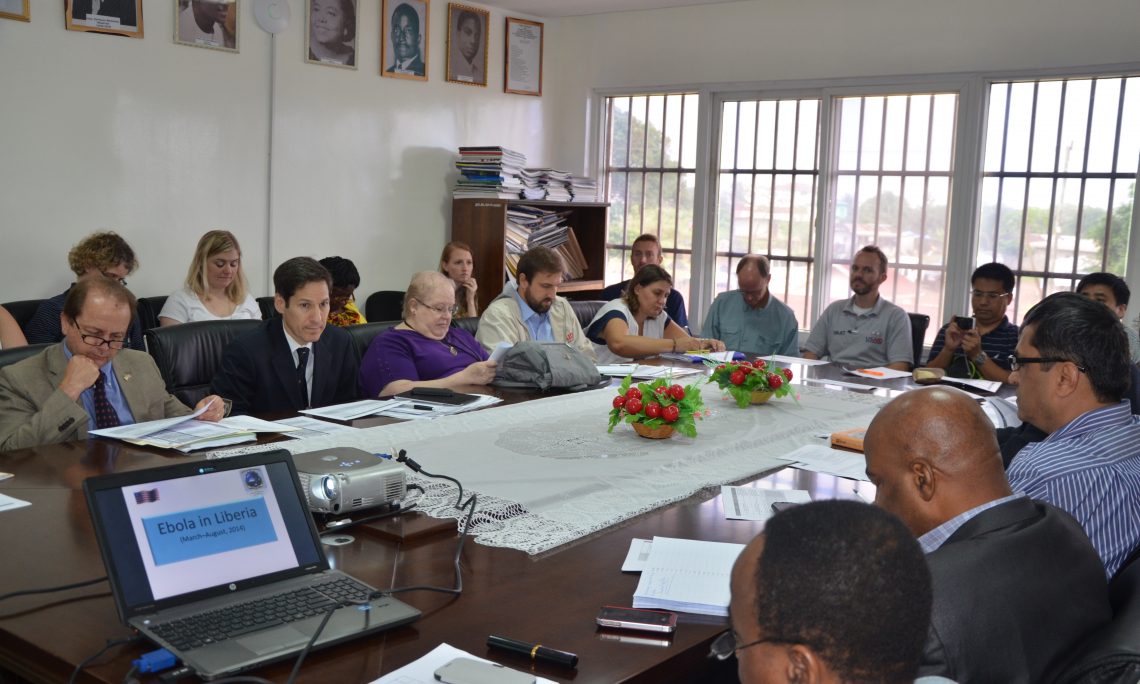 The Director of the Centers for Disease Control and Prevention (CDC), Dr. Tom Frieden, met with the Ministers of Health and Social Welfare and of Internal Affairs, Dr. Walter Gwenigale and Morris Dukuly, on Tuesday for an overview of the Liberian government’s response to the Ebola outbreak, which has killed more than 700 Liberians.

At the Health Ministry, Dr. Frieden also participated in the daily Incident Management meeting of the National Task Force on Ebola.

Internal Affairs Minister Dukuly, who also is Co-Chair of the National Task Force on Ebola, briefed Dr. Frieden about progress the government is making to stop the spread of the disease, and the challenges the country still faces in the fight against Ebola.

During the day, the CDC Director also talked to health care workers treating Ebola patients at the John F. Kennedy Medical Center and other hospitals, and workers at the Ebola specimen testing laboratory, operated by the Liberia Institute for Biomedical Research (LIBR).

Dr. Frieden also met with officials at the Call Center of the General Services Agency (GSA), which has established a special hotline for Liberians to call in case they need information about what to do if someone has Ebola or to provide the government with information about the location of bodies of Ebola victims for retrieval.

The CDC Director, who is leading a high-level delegation of U.S. medical experts and emergency responders to Liberia, also met with the representative of the World Health Organization (WHO) in Liberia, Dr. Nestor Ndayimirije, and discussed the international response to the Ebola crisis.

The delegation, which includes Dr. Tom Kenyon, Director of CDC’s Center for Global Health, and Jeremy Konyndyk, Director of USAID’s Office of U.S. Foreign Disaster Assistance (USAID/OFDA), arrived in Liberia August 24 to assess response activities, and to hear from government officials, international partners, and health care workers to see what can be done to stop the disease.

The CDC officials also travel this week to Sierra Leone and Guinea, two other West African countries hard hit by the Ebola outbreak.

On Monday, Dr. Frieden met with President Ellen Johnson Sirleaf and later, with most of Liberia’s National Task Force on Ebola, including President Sirleaf, Vice President Joseph Boakai, President Pro Temp of the Senate Alex Tyler, Speaker of the House Gbehzohngar Findley and Chief Justice of the Supreme Court Francis S. Korkpor.  Key members of the Cabinet and Senators and Representatives also attended the meeting. The discussion centered on the key challenges facing Liberia as it tries to curtail the spread of the disease.