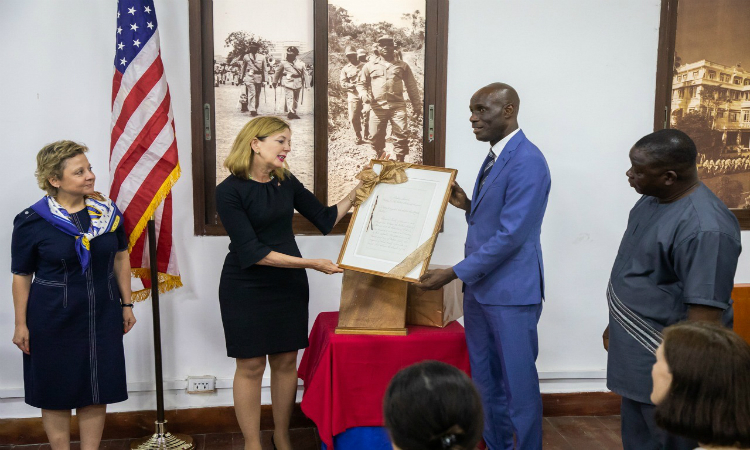 Liberian Minister of Information, Cultural Affairs and Tourism Eugene Lenn Nagbe welcomed U.S. Assistant Secretary of State for Educational and Cultural Affairs Marie Royce at the National Museum of Liberia on June 28 for an event commemorating the historic ties between Liberia and the United States. Before an invited audience of representatives of the Liberian tourism industry as well as cultural specialists and historians, Assistant Secretary Royce presented an archival copy of the 1862 Treaty of Commerce and Navigation between the U.S. and Liberia and Liberia’s Instrument of Ratification, as well as books of Liberian history and literature for the Museum’s reference collection.

Assistant Secretary Royce highlighted the important role that museums play in recording and preserving national identity, stating, “National Museums are places of memory and inspiration. They preserve and protect precious works of art and culture, as well as everyday objects that record who we are and where we came from.” She emphasized the value of cultural heritage and historic sites in attracting tourists and promoting economic development.

Ms. Royce also discussed the State Department’s Ambassadors Fund for Cultural Preservation (AFCP), a competitive grant program that supports projects to preserve cultural heritage in developing countries, including historic buildings, archaeological sites, ethnographic objects, paintings, manuscripts, and indigenous languages and other forms of traditional cultural expression. To date, AFCP has supported more than one thousand projects to preserve cultural heritage worldwide, including a grant in 2001, the first year of the Fund’s existence, to the National Museum of Liberia.

Further information on the Ambassadors Fund for Cultural Preservation can be found at https://eca.state.gov/cultural-heritage-center/ambassadors-fund-cultural-preservation