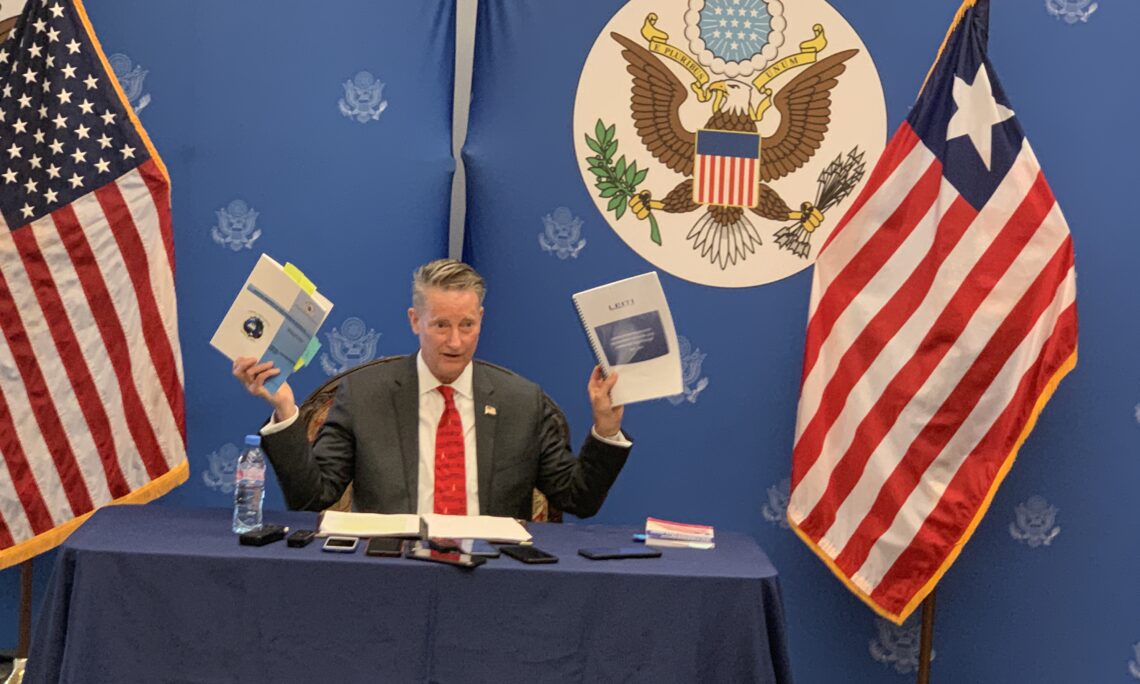 Good afternoon! I appreciate everyone’s presence today in what will likely be our last press roundtable of 2022. It has been an eventful year, and I want to begin by wishing everyone a happy holiday season and healthy, peaceful and prosperous new year.

These opportunities to speak directly with you, journalists representing the broad Liberian media landscape, are so important because journalism is essential for a thriving democracy, and we want to demonstrate that concept through this kind of open and transparent process.

Before I jump into my main remarks on Liberia’s integrity institutions, I want to congratulate the Liberian government on two recent achievements. It was a year and a half ago that others and I began to raise the alarm about the theft of more than half of the electricity that the LEC produces. I am pleased today to recognize LEC’s efforts to regularize accounts and distribute transformers and meters, bringing many customers into compliance. There are still too many consumers who are not paying their fair share, but the outlook is better today than it was, and we encourage the LEC to continue all efforts to ensure its financial sustainability by eliminating the scourge of electricity theft.

I would also like to take this moment to single out the impressive progress made by the new Managing Director of the National Port Authority of Liberia. In only two months, she has already streamlined operations, reduced ghost employees, and helped accelerate the dredging project at the Freeport of Monrovia, allowing larger ships to enter the port, which helps lower the unit costs of imports. Her administrative reforms have brought new life to infrastructure planning across the country, and she is examining options to improve facilities at all four ports. The new Managing Director is an example of what a difference leadership can make, and what can happen when senior officials are fully focused on their portfolios.

Now for the main topic of today’s roundtable.

I recently visited several of Liberia’s integrity institutions, meeting with both the leaders and employees of these important organizations, and if you follow the Embassy on Facebook, you will have seen pictures of some of those meetings. I had the pleasure of visiting the Internal Audit Agency, General Auditing Commission, Financial Intelligence Agency, the Public Procurement and Concessions Commission, and the Liberia Extractive Industries Transparency Initiative. These were not my first meetings with Liberia’s integrity institutions, nor will they be my last.

One of my purposes for this recent round of meetings was to assess whether the integrity institutions had seen improvements in accountable governance in the aftermath of the U.S. Treasury Department sanctions announced in August. Based on these recent meetings, I have three main takeaways I would like to share with you today.

Takeaway #1: Liberia will not prosper without well-functioning integrity institutions

Over the past 20 years, the United States and Liberia have worked together to build a prosperous Liberia for the future of all Liberians. After years of war, Liberians came together in 2003 to re-build the nation’s democratic institutions, as well as safeguards for protecting its democratic governance. Chief among these safeguards were Liberia’s integrity institutions which were built, funded, and staffed with some of Liberia’s best and brightest minds. These institutions were created by law and designed to be shielded from political interference. In combination with a robust civil society environment and a vibrant free media, they give Liberia unique strengths in maintaining its democracy. As Liberia built its post-war foundation on democracy and the rule of law, the international community took notice and multinational businesses returned to Liberia’s shores, and GDP growth accelerated from 2003 to 2011.

Liberia’s integrity institutions need more resources to fulfill their legal mandates. I found that for the most part, the integrity institutions are staffed by hard-working, dedicated people motivated to make Liberia a better country. Unfortunately, I also saw that many of these essential organizations have much smaller budgets than they enjoyed years ago, and even less purchasing power, thanks to inflation. To make matters worse, most of them never receive the full amount appropriated to them by the legislature. Starved of funds and unsure whether, or when, they will receive their next allotment, they are nowhere near as effective as they should be. In some cases, funding shortfalls are more than fifty percent of the amount granted to them in the national budget. In many cases, these funding gaps lead to major cuts in operational funds, leaving the integrity institutions without fuel for vehicles or laptops for investigations and audits.

If the goal is for more efficient, effective governance and genuine oversight of service delivery, I strongly encourage the Legislature to increase the budgets of these institutions. But at the very least, the Legislature should exercise its rightful fiscal oversight authority by ensuring that the amount appropriated to these organizations is the amount they actually receive. In Liberia’s constitution, only the Legislature has the power of the purse – the Executive Branch (through the Ministry of Finance and Development Planning) is responsible for distributing funds to government entities through “allotments,” but has no authority to alter the amount determined by the legislature in the annual budget. Yet in many cases, budgeted amounts are changed, and allocations are further reduced, often without prior input from the Legislature. I call on Liberia’s legislative and executive branches to work together to ensure that Liberia’s budgets, which have the force of law, are honored, and that Liberia’s integrity institutions receive their full budget appropriations. I hope that Liberian lawmakers are regularly meeting with the Ministry of Finance to ensure that government expenditures are in line with national budget appropriations, and I urge lawmakers and civil society to hold the government accountable for any deviations.

It is one thing to say you support the work of public auditors, but it is another to allow full and complete audits, and to respond to the deficiencies they uncover. It is one thing to say you support corruption investigations, but it is another to allow investigations to be undertaken without political interference. It is one thing to say you want transparency in Liberia’s extractive industries, but it is another to publicly disclose all government extractive industry concession and exploration agreements and revenue, publicly calling out illegal actors. It is one thing to support the Code of Conduct, but it is another to enforce compliance with asset declaration requirements.
By now, I think you get my point, and I will conclude by saying that Liberia’s integrity institutions urgently need political will to fulfill their mandates. Integrity institution leaders told me that U.S. Global Magnitsky sanctions have given them more breathing room to fulfill their mandates; however, they need more than just breathing room, they need the full backing of Liberia’s political leaders. In this election year, I urge Liberia’s leaders to be bold in support of Liberia’s integrity institutions, as their fate will strongly influence the fate of the nation.

My last point will be about Liberia’s financial institutions, another key factor in the health of Liberia’s investment environment. Just as electricity customers obviously need to pay for what they consume, those who take out loans must pay back what they have borrowed. Liberia has a reputation today as a market where well-connected borrowers don’t pay back their loans, while micro-finance borrowers of much more modest means have a laudable pay-back rate. Strangely, it is wealthier consumers who have stained Liberia’s reputation. In some cases, rich businesspeople with valuable property and ample resources stashed away in other countries, are refusing to pay high dollar debts that they accrued in Liberia. When confronted with this fact, they even resort at times to threats against the bank officials. Let me ask you – how can the Liberia Bank of Development and Investment issue small and medium loans to start new businesses when loan defaults by wealthy borrowers have left them with few funds to lend?
Thank you for your time ladies and gentlemen! I look forward to taking your questions.