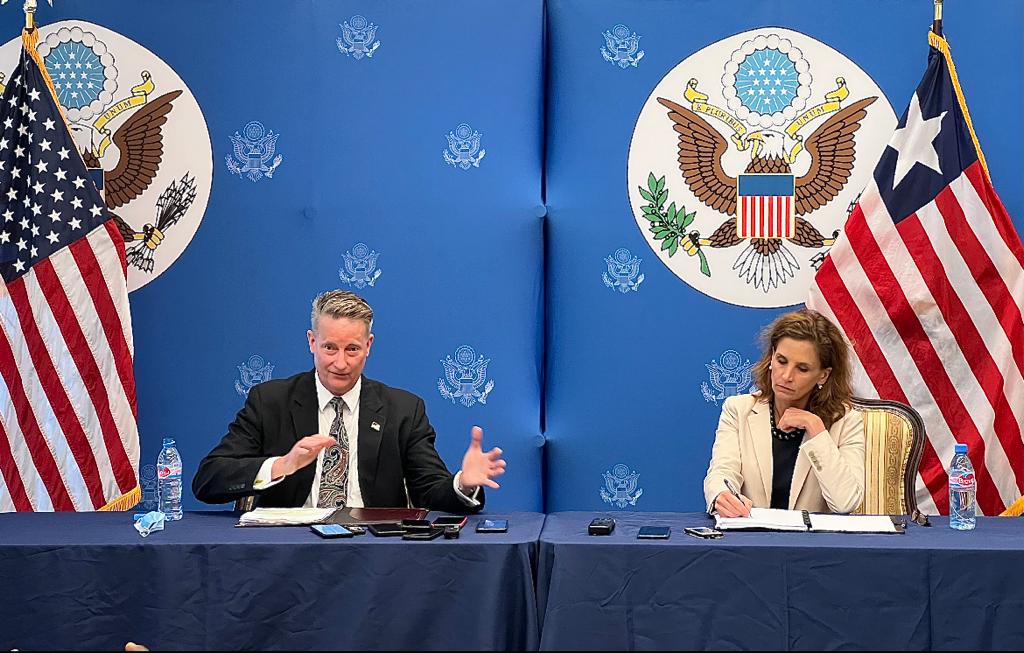 Good afternoon! Thank you all for being here and thank you to Acting Assistant Secretary of Global Public Affairs Elizabeth Trudeau for her visit to Monrovia. Now, for those of you who don’t know, Ms. Trudeau leads the Bureau of Global Public Affairs (GPA) whose mission is to effectively communicate U.S. foreign policy priorities and the importance of diplomacy to American audiences, as well as engage foreign publics to enhance their understanding of and support for the values and policies of the United States. Accordingly, during her short time here, she has met with key members of the media and civil society to better understand the status of media freedom, civil society, and government accountability in Liberia—

As Assistant Secretary Trudeau and I were discussing this morning with Minister Rennie, in the effort of pursuing government accountability and combatting disinformation, you journalists are essential to a functioning democracy, and we look forward to more of your honest coverage ahead of the 2023 elections. Your presence here, month after month, and the work you do every day, is surely a positive indicator of the dedication to press freedom and transparency.

Before I hand it off to Acting Assistant Secretary Trudeau, I would like to take the time to hit two housekeeping issues before I highlight some significant past and upcoming events:

Regarding the census, the donors and friends of Liberia would like to emphasize the following:

-The census began and is ongoing.

-The census is an important, non-political action required in the constitution.

-Opposition leaders should ask their supporters not to disrupt the census.

Regarding a story that was going around last week regarding U.S. currency being recalled – this is a rumor that sometimes makes the rounds and is completely false.   The United States Treasury has always stressed that despite new designs in our currency, the old bills in circulation remain legal tender.  As they announced when they released new $100 bills in 2011, “U.S. currency users should know they will not have to trade in their older design $100 notes when the new ones begin circulating.”

Regarding significant events, first, on the topic of Assistant Secretary Trudeau’s visit and press freedom, I would like to commend the Supreme Court of Liberia for the September 26th ruling in favor of One Media Incorporated, parent company of Punch FM radio station, which allows the radio station to finally begin operations after having applied for a broadcasting license in June 2018.

Despite meeting media licensing requirements under the law in 2018, Punch FM had to go through a number of legal challenges to be allowed to air. Now, following a series of appeals from both One Media Incorporated and the Liberian government, Punch FM can begin to broadcast.

This is a win for free speech and press freedom in Liberia, and a demonstration of judicial independence.

Another cause for congratulations is the Government of Liberia passing the 2023 Millennium Challenge Corporation scorecard for the first time since 2018. Liberia has made significant progress, specifically in the area of controlling inflation. Going forward, we urge the government to focus on the indicators under the “investing in people” category, which include health, education, and natural resource protection. This could make Liberia more competitive for a potential second Millennium Challenge Corporation compact. Liberia is one of 66 countries that will be further evaluated by the MCC Board next month to determine eligibility for a compact.

I also want to note that it was three months ago, almost to the day, that I announced to you in this room the Treasury Department’s Global Magnitsky sanctions of Nathaniel McGill, Bill Twehway, and Syrenius Cephus. I think it’s important to draw our attention back to the Treasury Department’s statement, specifically its notification that persons that engage in certain transactions with these sanctioned individuals “may themselves be exposed to sanctions or subject to an enforcement action. Furthermore, unless an exception applies, any foreign financial institution that knowingly facilitates a significant transaction for any of the individuals or entities could be subject to U.S. sanctions.” This applies not only to those who transact with these three individuals, but also with the other two individuals sanctioned under Global Magnitsky in recent years: Senator Prince Y. Johnson and Senator Varney Sherman.

Lastly, next month in Washington D.C., President Biden will host the long-anticipated U.S.-Africa Leaders Summit — the first one in eight years. Along with other distinguished heads of state from across the continent, President Weah will represent the government and the people of Liberia in the interest of enhancing future collaboration between the United States and the entire African continent. As the Secretary underscored during his November Africa trip: Africa will shape the future — not just the future of the African people, but of the world. Africa will make the difference in tackling the most urgent challenges and seizing the opportunities we all face.

At the U.S.-Africa Leaders Summit we plan to build on our shared values to better foster new economic engagement; reinforce the U.S.-Africa commitment to democracy and human rights; mitigate the impact of COVID-19 and of future pandemics; work collaboratively to strengthen regional and global health; promote food security; advance peace and security; respond to the climate crisis; and amplify diaspora ties.

I believe it will be a productive summit, where Liberia pledges to continue taking steps in the direction of economic, social, and political progress ahead of the 2023 elections.