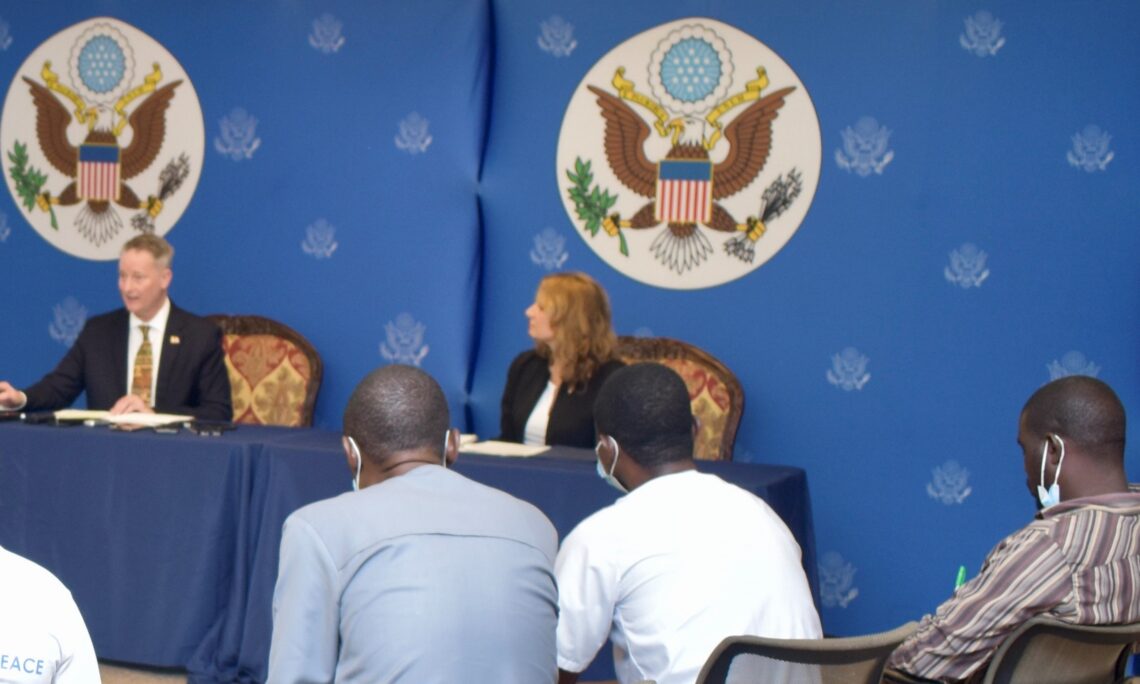 Good Afternoon! Thank you all for being here and thank you to Ambassador-at-Large for Global Criminal Justice Beth van Schaack for a short, but productive visit to Liberia. As you all are aware, Ambassador van Schaack was sworn in as the Department’s sixth Ambassador-at-Large for Global Criminal Justice (GCJ) on March 17, 2022. In this role, she advises the Secretary of State on issues related to the prevention of and response to atrocity crimes, including war crimes, crimes against humanity, and genocide.

Before I hand it off to Ambassador van Schaack, I would like to take the time to highlight significant events since the last time we convened a press roundtable in August:

-First, I would like to commend President Weah for his impactful remarks at the United Nations General Assembly last month, where he stood on the global stage and pledged his government’s commitment to fostering “an environment for the conduct of free, fair, transparent, and inclusive elections” in 2023. The U.S. government fully supports this commitment, and we look forward to representatives of every other political party in Liberia stepping up to issue similar pledges of peace in the upcoming election cycle.

-In his remarks, President Weah also touched on the impact of Russia’s unprovoked aggression against Ukraine, and its impact on the global supply chain, which is contributing to a global food crisis.

-As Secretary Blinken stated, also at this year’s United Nations General Assembly, the U.S. government’s foreign policy priorities are (1) advancing global health and global health security, (2) upholding the UN Charter and shaping the UN’s future, and (3) combating food insecurity. The world is facing a global food security crisis with multiple causes ranging from climate change and COVID-19 to conflicts, including Russia’s ongoing war against Ukraine. To combat this, the United States is leading by example: across the world the U.S. government has consistently provided sustained investment in global agriculture to:

In Liberia, the U.S. Embassy has consistently, and over many years, worked on the ground to combat food insecurity. For example, USAID during the COVID-19 crisis, provided direct cash assistance to families in need.

-In a new initiative, Liberia has recently been selected as a Feed the Future Focus country, which will allow us, through USAID, to pursue even more programming to fight food insecurity, particularly with our existing Agribusiness Development Activity.

-We look forward to this and other ways of further supporting the agricultural sector in Liberia.

-Lastly, I would like to commend the Ministry of Health for their efforts to vaccinate the public against COVID-19. As of today, it is reported that Liberia has vaccinated nearly 72% of the public, which surpasses the World Health Organization’s target vaccination rate of 70%, and would place Liberia as the 4th most vaccinated country on the African continent. We would also like to thank our USAID and CDC teams here at U.S. Embassy Monrovia for their work with the Ministry of Health. These two agencies worked tirelessly with their Liberian government and development partner counterparts to achieve this significant milestone.  Congratulations on a job well done!

I will now pass the mic to Ambassador-at-Large for Global Criminal Justice Beth van Schaack.

IF ASKED ABOUT RICE:

Like all of our foreign assistance, our food security efforts are targeted at helping countries solve problems that are beyond their ability to solve on their own.  We are confident that the rice situation is a challenge that is within the Government of Liberia’s ability to solve, and that they will do so quickly.