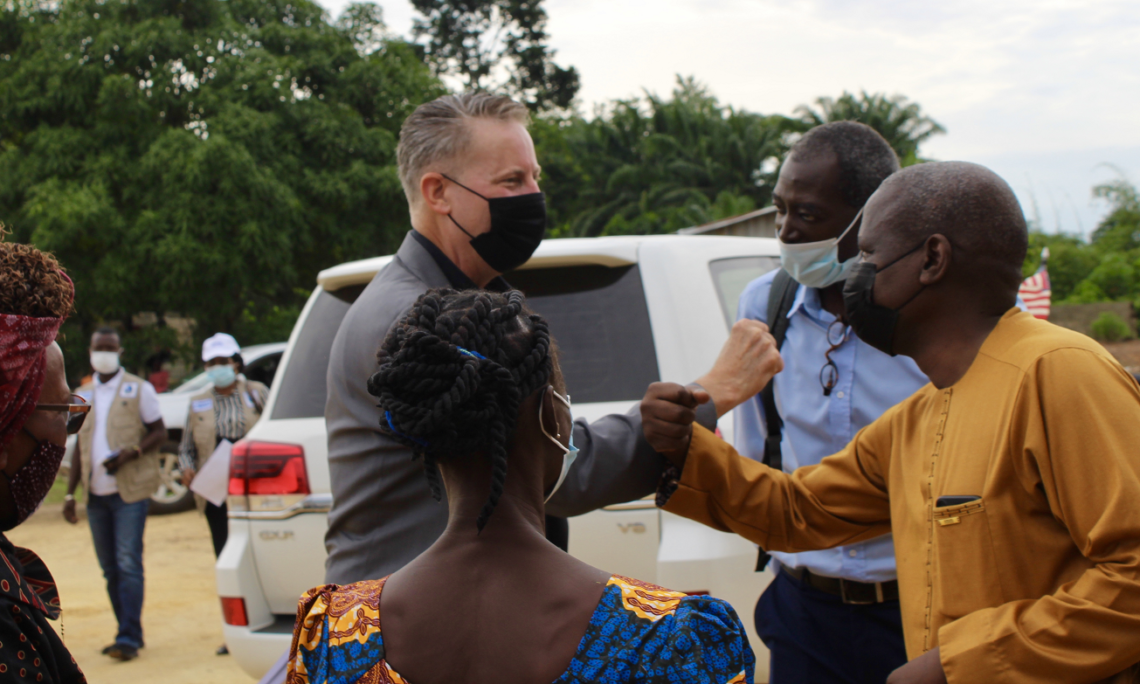 On June 16, 2021, the International Day of the African Child and the start of a bed net distribution campaign to prevent malaria infections throughout the 15 counties, Ambassador Michael McCarthy visited USAID health and education programs in Kakata, Margibi County.

Ambassador McCarthy first visited Sackie Gbomoh Public School, which receives support from the U.S. Government through the USAID Read Liberia and Accelerated Quality Education programs.  He thanked the gathered leaders, educators, parents, and community members for their commitment to the education of the children in the community. The Ambassador emphasized the importance of parental and community involvement in the education of their children, the need to start school at the right time, and the benefits of staying in school, especially for girls.  He then toured the newly renovated facilities and joined grades 1 and 2 students, who were reading new books.  Both the renovations and the newly published books were funded by the American taxpayers via U.S. Government programs.

Ambassador McCarthy then met with county health officials and community members at C.H. Rennie Hospital and the Kakata Health Center.  He joined them in launching the large-scale bed net distribution campaign that takes place every three years.  This year, it is funded by the U.S. Government and the Global Fund, and the campaign is being led by the Government of Liberia and Plan International.  In total, 2.7 million insecticide-treated bed nets will be distributed from June 16 to 25 with close monitoring from the U.S. President’s Malaria Initiative team.  Sleeping under an insecticide-treated bed net is one of the best ways to prevent malaria infections, and Liberia is the first to distribute country-wide the new interceptor next generation (iG2) nets, which use two highly effective insecticides to kill mosquitoes on contact.

As the visit concluded, Ambassador McCarthy thanked the community leaders, professionals, parents, and young people for their commitment to the health and education of the children in Margibi County.  The County Superintendent assured the Ambassador that the county will make maximum use of the U.S. Government investment.  Ambassador McCarthy said that he will fondly remember his trip to Kakata and hopes to come back in the near future to celebrate their progress.