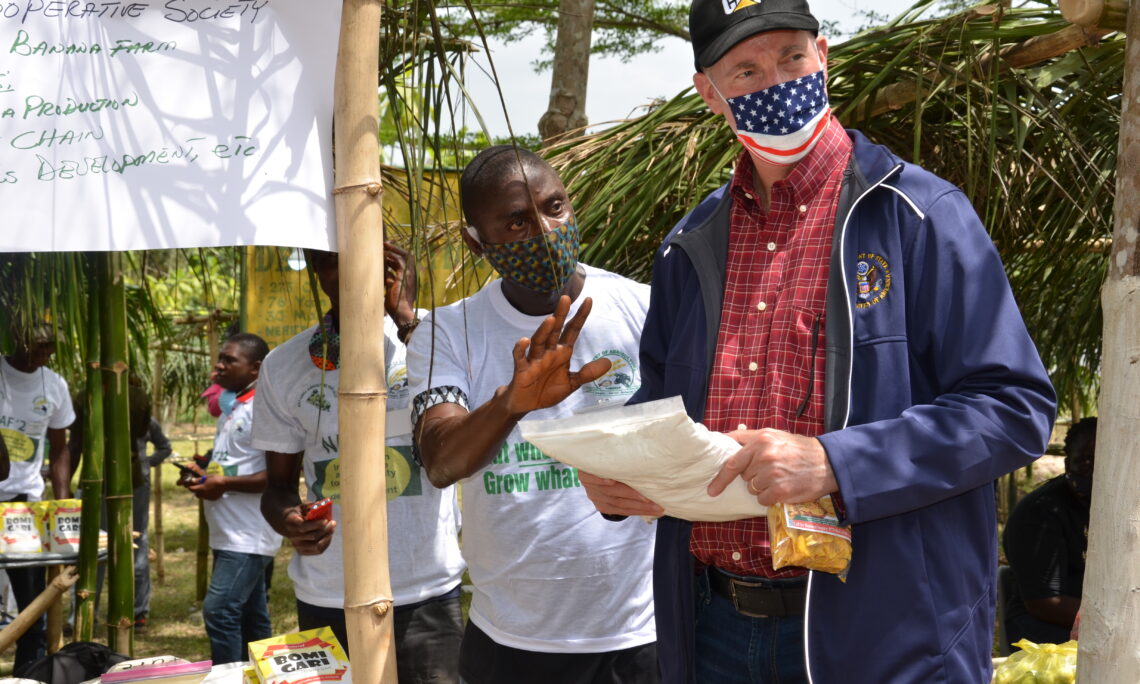 Pledging U.S. support, Ambassador Michael McCarthy said he is convinced that Liberians “can build an agriculture sector that provides the basis for Liberia’s success on its journey to self-reliance.”  Ambassador McCarthy spoke at the opening of the National Agriculture Fair in Suakoko, Bong County last Friday, February 12.

He noted that support for the agriculture sector by the United States Agency for International Development (USAID) “helped farmers grow more rice, cassava, and vegetables by introducing higher yielding seeds, new mechanized tillers, and teaching farmers new cultivation techniques.”  He added that USAID is planning new projects to build on these gains and that “continued success requires the strong commitment of all our Liberian partners and stakeholders in the agriculture sector, including the government, farmer cooperatives, and private sector actors.”

Speaking on Sunday at a program to mark the end of the fair, Director Walter said, “our hearts should be endlessly filled with gratitude for farmers” whose hard work “provide us the most important necessity for life and survival: food.”  She added that Liberians should be particularly grateful to their farmers “who with nothing more than a handheld hoe, or a machete, and their bare hands grow the bitter balls, okra, and rice that fill plates across Liberia and fuel Liberia’s bright future.”

The National Agriculture Fair, held under the theme “Invest in Agriculture for Prosperity and Development,” was kicked off by Liberian President George Weah, who called on Liberian farmers to adopt a business approach to farming.  He announced the establishment of a technical committee comprising the Ministries of Finance and Development Planning, Agriculture, and Justice as well as other agencies of the Liberian Government to work together with banks and other financial institutions to provide farmers and agricultural institutions access to funds necessary to spur the development of the agriculture sector.