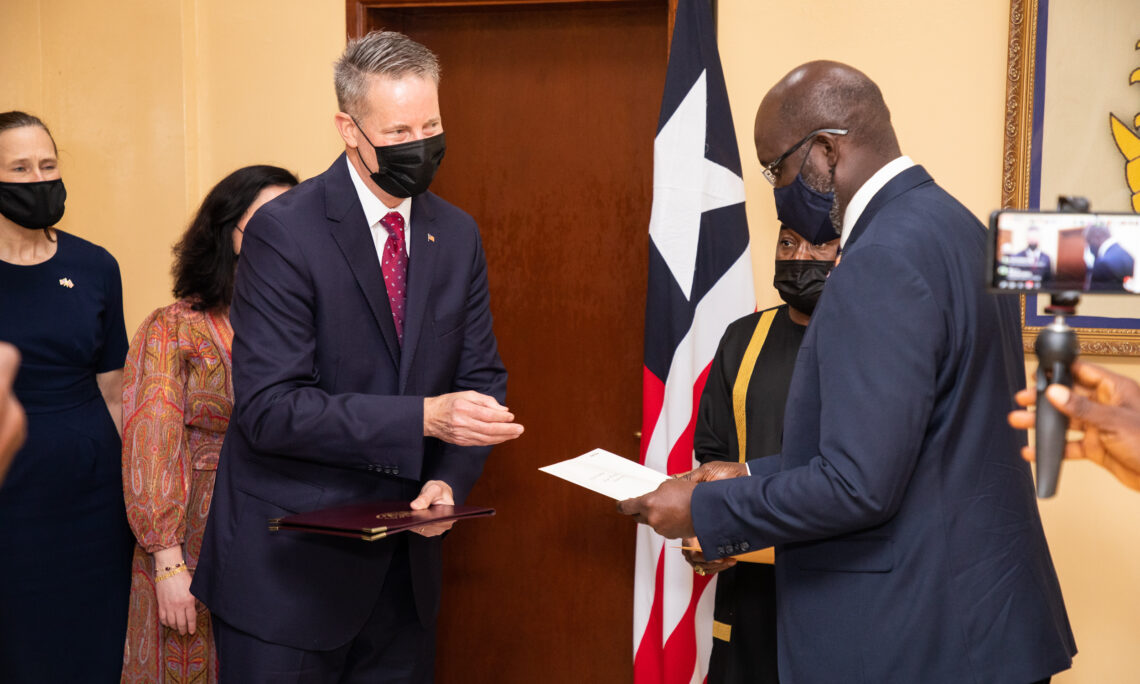 On Friday, January 22, 2021, His Excellency, President George M. Weah, received the credentials of U.S. Ambassador to the Republic of Liberia Michael A. McCarthy at the Ministry of Foreign Affairs.

Ambassador McCarthy thanked President Weah for his gracious letter to U.S. President Joseph R. Biden expressing congratulations on his inauguration, noting it was one of the first such messages from an African country.  The Ambassador underscored the honor of serving as U.S. Ambassador to Liberia, a country with which the United States shares a storied history and cherishes enduring bonds of friendship, partnership, and family.  President Weah conveyed his appreciation to the Biden Administration for extending DED (Deferred Enforced Departure) status until June 30, 2022, noting that this action will provide time and relief to Liberians who have been in the United States for many years.  Ambassador McCarthy hailed the extension as a sign of the longstanding partnership and friendship between the United States and Liberia.

Accompanied by his wife Sandra Acevedo McCarthy, Deputy Chief of Mission Alyson Grunder, and Defense Attaché LTC Matt Alden, Ambassador McCarthy highlighted the excellent collaboration between U.S. government agencies and Liberian health authorities in fighting COVID-19 and expressed confidence the disease will be stamped out in Liberia with continued vigilance.  He also noted the U.S. commitment to complete the new National Reference Laboratory as a state-of-the-art facility for infectious disease testing and research.

Both President Weah and Ambassador McCarthy agreed on the importance of nurturing Liberia’s youth and helping Liberia’s next generation of leaders meet their full potentials.  Ambassador McCarthy noted that Peace Corps, USAID, and State Department educational and outreach programs will continue to support our countries’ historic and important relationship, moving forward together.

Ambassador McCarthy thanked His Excellency President Weah and members of his cabinet including Minister of Foreign Affairs Dee-Maxwell Sah Kemayah, Acting Minister of State Trokon A. Kpui, and Minister of Information, Cultural Affairs, and Tourism Ledgerhood J. Rennie for the warm welcome accorded to him and his family and noted his eagerness to work with the President and his cabinet in advancing the enduring and strong U.S.-Liberia relationship.

My U.S. Embassy colleagues and my wife Sandra

It is my greatest honor to stand before you today to represent the President of the United States of America, Joseph R. Biden, and become a member of the Diplomatic Corps accredited to the Republic of Liberia, a country with which the United States shares a storied history and cherishes enduring bonds of friendship, partnership, and family.

I arrive in Monrovia in the midst of the global COVID-19 pandemic – just as vaccines are beginning to become available to give us hope.  It is heartening to know that the U.S. Embassy health team – including the Centers for Disease Control and Prevention, the U.S. Agency for International Development, and our National Institutes for Health – continues to work closely with Liberian health authorities in countering the coronavirus.   Our previous investments in fighting infectious disease in Liberia are proving their worth in the COVID-19 prevention initiatives, surveillance, testing and treatment that Liberia is implementing to protect its people.  We must remain vigilant, but we are certain that COVID-19 will be stamped out here, as was Ebola before it, and that Liberia’s health systems will be further strengthened in the process.  In this regard, we look forward to completing the new National Reference Laboratory as a state-of-the-art facility for infectious disease testing and research.

Mr. President, both our countries are undergoing change in political leadership this month as a result of recent nation-wide elections.  Such elections provide democracies with an opportunity for wide-ranging outreach to our citizens and soul searching on our policies and our legacies.  We deeply respect the example set by you personally, demonstrating discipline, calling for non-violence and partisan civility, and supporting the National Election Commission’s vital independence.  Your leadership during Liberia’s first national elections since the departure of UNMIL was reassuring to the international community, but more importantly, it was inspiring to the Liberian people, resonating with their clear expectation of a peaceful, free and fair process.

Mr. President, we are pleased to enter the 60th year of our development partnership – which began in the very first year of USAID’s existence.  We applaud your government’s efforts to address the causes of entrenched poverty in Liberia through the Pro-Poor Agenda for Prosperity and Development and we believe our assistance efforts align effectively to support its commendable goals.  While we continue work alongside Liberians to expand access to better healthcare and education – fundamentals of thriving societies – we are targeting our development programs to spur jobs and economic opportunity through private-sector led growth.

Liberia is fortunate to already have substantial foreign investment from companies that are well-reputed globally, reliable taxpayers and good employers.  Such firms as Firestone, ArcelorMittal, APM Terminals and Orange are long-term investors across a range of sectors, who have built infrastructure, trained Liberian workers and professionals, and returned revenue and benefits to the government of Liberia and to its people.  We appreciate your government’s understanding of the critical importance of attracting new investment by fostering a transparent and welcoming business climate.  As the economies of Ghana and Cote d’Ivoire – and more recently Sierra Leone — have shown, avoiding debt-traps, developing a capable and resilient workforce, creating a level playing field for investors, and working with them as partners in building Liberia’s future — are winning strategies to grow inclusive economic opportunity.

The Millennium Challenge Corporation has completed its first five-year compact with Liberia, a partnership that successfully rebuilt the Mount Coffee Hydropower plant, bringing increased reliability and access to electricity, among other significant achievements.  My Embassy team stands ready to confirm the public sector reforms already instituted by your administration and support your government’s efforts to implement and adopt the policies highlighted in Liberia’s MCC scorecard required for eligibility for a second compact.  Those same reforms will encourage additional foreign companies to choose Liberia as an investment destination, expanding the economy and funding the infrastructure development you so earnestly desire for your country.

We appreciate your government’s understanding of the corrosive effect that corrupt practices and conflicts of interest have in democratic governance.  While we work closely with your administration to increase domestic revenue mobilization, accountability, and public trust, my government also wants to support Liberian efforts to foster transparency in governance and implement policies and systems that will prevent corrupt practices and deter individual malfeasance.

Mr. President, as you have rightly noted, almost two decades have passed since this country’s 14-year civil war, and Liberia is now contributing to regional stability through its participation in peacekeeping missions in Mali and Sudan.  Our Mission’s Department of Defense personnel work side by side with the Ministry of National Defense and Armed Forces of Liberia to enable defense institution building and military education and training and to maintain the AFL’s apolitical role.  Similarly, we continue to support the professionalism of the Liberia National Police, the Liberia Drug Enforcement Agency and the Liberia Immigration Service to further the rule of law, human rights and security in Liberia.

As Liberia approaches its 175th year of independence in 2022, the U.S. Embassy is privileged to work with your government on a plan to redevelop Providence Island, preserve its rich cultural heritage and natural landscape, and encourage tourism.  As you know, we have already started the process of stakeholder consultation – including dialogues with traditional elders, youth, tourism professionals, community leaders and government officials – and look forward to signing a memorandum of understanding with you in the coming months.

Mr. President, your empathy for the Liberian people is exemplified by your willingness to listen to diverse members of the population, including the compelling voices of Liberia’s energetic and impressionable youth.  It is for those youth that we must continue to work together to build a healthy and prosperous Liberia, with secure and bright futures for all.  Through Peace Corps, USAID and State Department educational and outreach programs, our Mission continues to invest in Liberia’s next generation and the emerging leaders who will guide our countries’ historic and important relationship, moving forward together.

With these words and my personal commitment, I humbly present to you on behalf of my President, the Letter of Recall of my predecessor, as well as my own Letter of Credence.