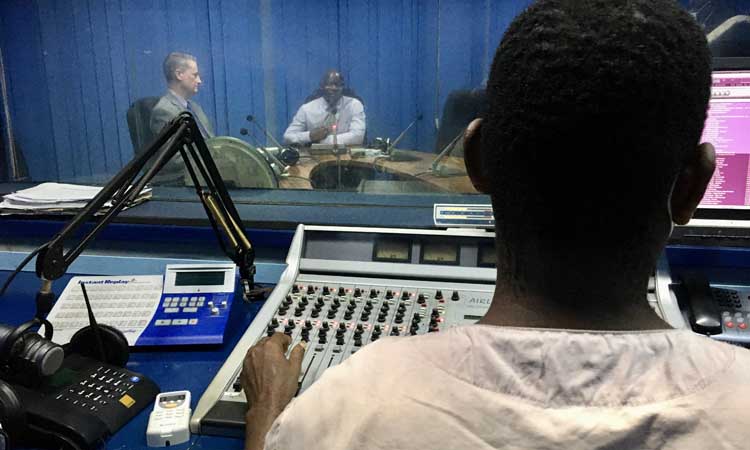 On February 8, 2021, Ambassador Michael A. McCarthy took part in the Moving Forward Together program on ECOWAS Radio 91.5 FM.  Moving Forward Together, hosted by Sayou Tequah, showcases how Americans and Liberians are working together to achieve shared goals.  Every week, Sayou discusses a different topic and listeners call in to share their own perspectives and ask questions.

Ambassador McCarthy touched on a number of topics that are part of the relationship between the United States and Liberia: “The traditionally bi-partisan, very strong support for the country of Liberia, it absolutely continues full-steam ahead … One thing that is absolutely consistent on all sides is that we feel that the relationship today is all about helping Liberians to help Liberians.  It’s what we call the journey to self-reliance.  There is really this strong sense throughout the [U.S.] Government.  That’s where our efforts are: working shoulder-to-shoulder, training, working on technical issues, helping Liberians help Liberians.”

When asked about how corruption affects the economy, he said, “The perception of corruption is really a problem for attracting new investors to Liberia.  The people of Liberia, they have dreams, they have interests.  People want to have long-term jobs.  They want to have certainty in their lives.  Really, at the end of the day, what is going to bring a better economy to the country of Liberia is foreign investment.  It is so important to eliminate the perception of corruption and attract that foreign investment, so Liberians have the opportunity for more jobs.”

Finally, when asked about how he sees the future of USAID contributions to Liberia, Ambassador McCarthy explained, “USAID has been in Liberia since the first year it was created in 1961.  It’s just about to hit its 60-year anniversary.  We’ve been here the whole time … The focus of the organization over such a long time also tends to vary.  So, if you look around the country today, you will see buildings that USAID contributed to construction, such as the John F. Kennedy Hospital … The focus today, however, for the United States Government, and specifically for USAID, is technical development at the individual level.  So, training people … It’s working with people; it’s people-to-people assistance.”