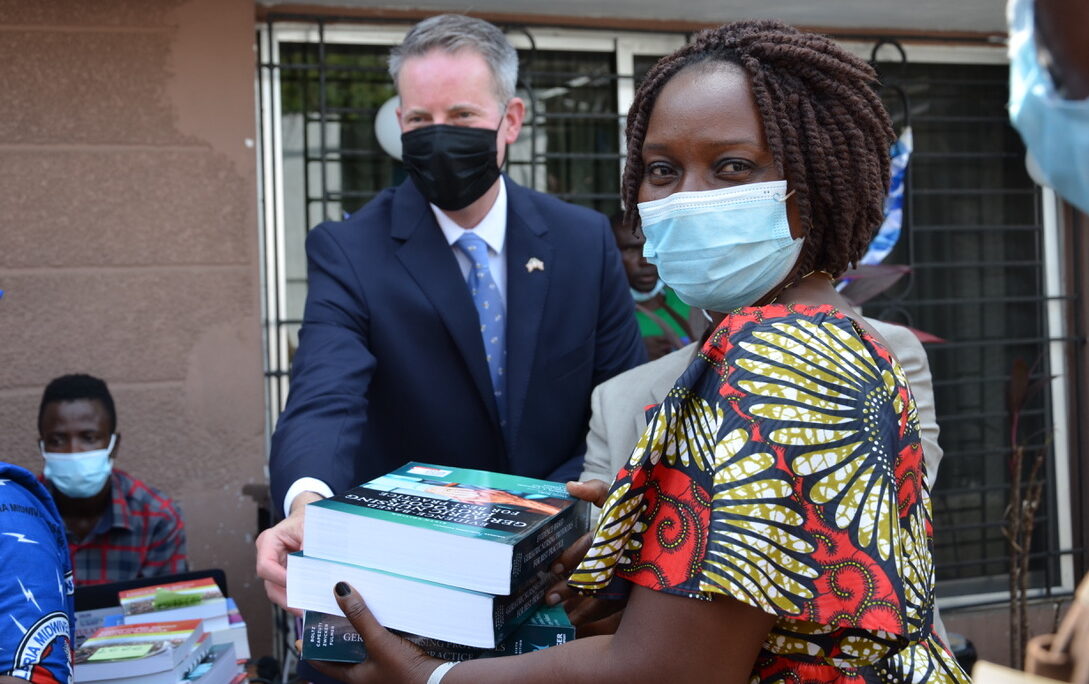 On Friday, February 5, 2021, Ambassador Michael A. McCarthy handed over 430 new, up-to-date nursing and midwifery textbooks to the Liberia Board of Nursing & Midwifery (LBNM). The Ambassador’s first public event since his arrival in Liberia demonstrates the value the U.S. Government places on healthcare and critical front-line workers such as nurses and midwives.

The textbook donation was made possible by the U.S. President’s Emergency Plan for AIDS Relief (PEPFAR) and the U.S. Department of Health & Human Service’s Health Resources and Services Administration (HRSA).

U.S. Government supports internal medicine residency training and family medicine training, including in nursing and midwifery, via the U.S. President’s Emergency Plan for AIDS Relief, commonly referred to as PEPFAR. Ambassador McCarthy noted, “Today we celebrate one aspect of this massive program. Our understanding of medicine is always improving. That’s why it is essential for medical students to have up-to-date textbooks. Nursing and midwifery affect some of the most vulnerable and precious among us: newborns and their mothers. With these 430 textbooks, the next generation of nurses and midwives can practice their craft confidently knowing they are equipped with the latest knowledge.”

PEPFAR, now in its 18th year, supports antiretroviral treatment for nearly 17.2 million people living with HIV-AIDS globally – including in Liberia. PEPFAR has enabled 2.8 million babies to be born HIV-free to mothers living with HIV and has provided critical care and support for 6.7 million orphans, vulnerable children, and their caregivers so they can survive and thrive.