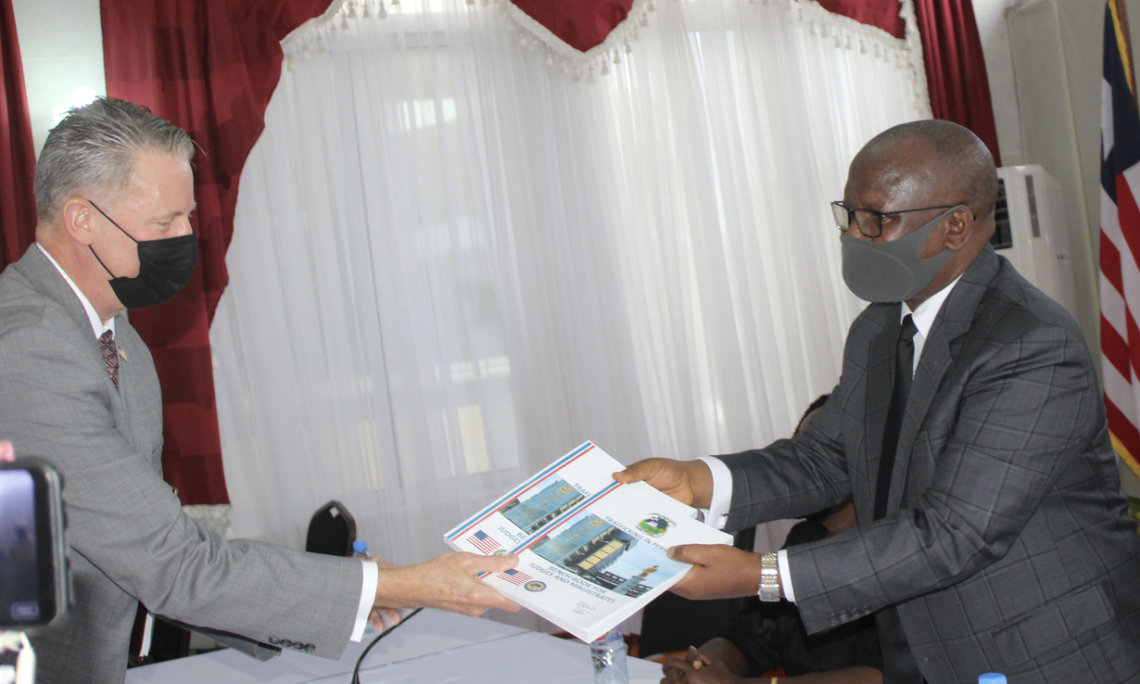 On August 2, Ambassador Michael McCarthy visited Minister of Justice Frank Musah Dean at the Ministry of Justice, and then joined Francis Korkpor, Chief Justice of the Supreme Court of the Liberia, at the Temple of Justice to donate the newly developed Trafficking in Persons (TIP) Legal Handbook for Prosecutors and TIP Bench-Book for Judges, respectively.

In July, Liberia was downgraded to Tier Two Watchlist in the U.S. Department of State’s annual TIP Report, the world’s most comprehensive resource of government anti-trafficking efforts. The report determined that the Government of Liberia did not fully meet the minimum standards for the elimination of human trafficking, even considering the measures required to try to prevent the spread of COVID-19 in 2020.

“The return of Liberia to Tier Two Watchlist on the TIP Report was a disappointment to all and a reminder of the intense work needed to make and sustain progress,” Ambassador McCarthy remarked at the ceremony. “Fortunately, the TIP Report also offers a clear action plan. One of the top recommendations was to ‘Train law enforcement and judicial officials on identifying, investigating, and prosecuting trafficking cases under the 2005 anti-trafficking law.’” The IDLO-developed handbooks will be the cornerstone of this training effort.

The TIP Report also acts as a guide to improving a country’s status by recommending a number of specific steps that can improve the ranking. This includes providing sufficient funding for victim-support services to increase the number of investigations, prosecutions, and—most importantly—convictions. The report also strongly recommended much needed changes to the 2005 Human Trafficking Law. Ambassador McCarthy lamented the consequences of inaction, “The failure to make these changes—or even to engage seriously in conversation about an amendment—puts millions of dollars in U.S. assistance to Liberia at risk. Through their silence, legislators may think they are not making any statement, but in fact they are sending a message to both traffickers and victims that fighting human trafficking is not a priority.  I hope legislators decide this issue is worth their time this year and make the necessary reforms to the law.”