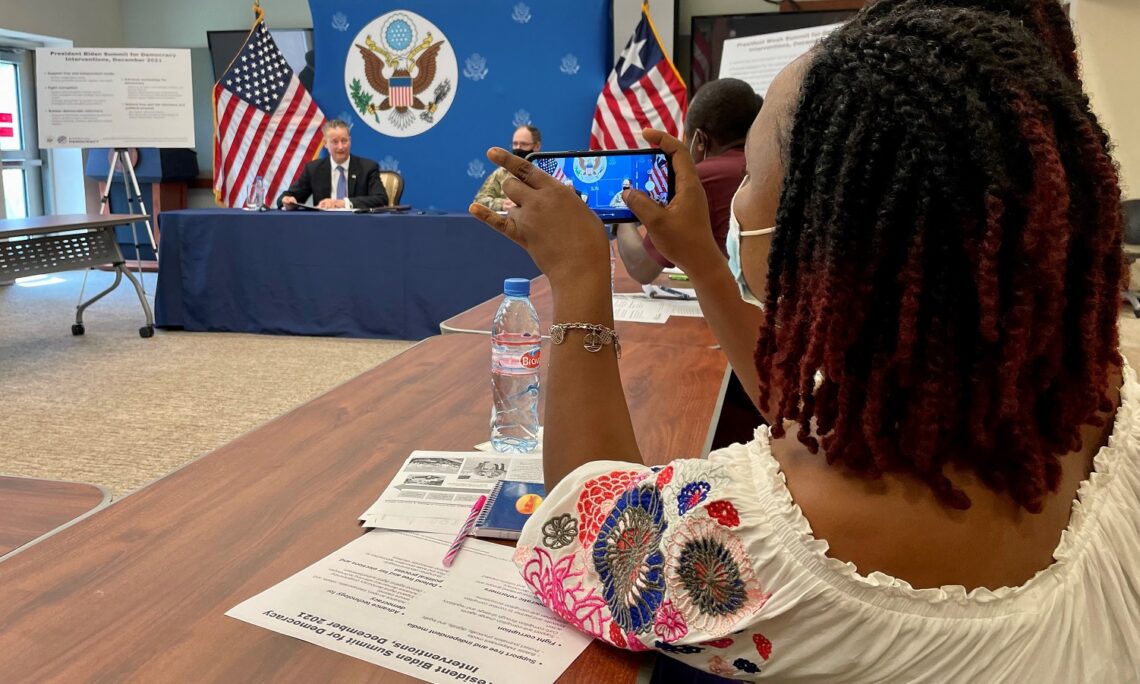 On February 8, 2022, Ambassador Michael McCarthy and visiting Major General Paul Rogers, the Adjutant General of the Michigan Army and Air National Guard and the director of the Michigan Department of Military and Veterans Affairs, spoke with the media at a press roundtable at the U.S. Embassy in Monrovia.  Ambassador McCarthy led a discussion on the Summits for Democracy and vaccination campaigns in Liberia, and Major General Rogers informed the gathered reporters about the State Partnership Program between the Michigan National Guard and the Armed Forces of Liberia.

Ambassador McCarthy first brought the reporters attention back to the Summits for Democracy, the first of which took place on December 9, 2021.  The second summit will take place in December of this year.  2022 is the “Year of Action” to advance the summits’ goals:  defend against authoritarianism, address and fight corruption, and promote respect for human rights.  Each invited leader, including President Biden and President Weah, announced specific actions and commitments to meaningful internal reforms and international initiatives that will take place during this year.

President Biden announced the Presidential Initiative for Democratic Renewal at the opening of the summit.  This initiative is an expansion of the U.S. Government’s efforts to defend, sustain, and grow democratic resilience with likeminded governmental and non-governmental partners.  It centers on five areas of work crucial to the functioning of transparent, accountable governance, including supporting free and independent media, fighting corruption, bolstering democratic reformers, advancing technology for democracy, and defending free and fair elections and political processes.  The U.S. Department of State also announced a complementary set of initiatives.

President Weah also announced the Government of Liberia’s own interventions for the Year of Action.  Ambassador McCarthy acknowledged these commitments, “We are pleased to see that President Weah also made important pledges.  We think they are excellent examples of specific and meaningful actions that will grow democratic resilience right here in Liberia.”  He also encouraged the press and public to keep track of the interventions prior to the December summit, “Democracy requires effort from the government as well as the populace, and the media are an essential connector between the two.”

Ambassador McCarthy then spoke about the ongoing COVID-19 vaccination campaigns in Liberia.  He noted that the United States is proud to support Liberia’s efforts to protect all Liberians against COVID-19.  To date, the U.S. Government have donated nearly 900,000 doses of COVID-19 vaccines to Liberia, both the one-shot J&J vaccines and the two-shot Pfizer vaccines.  Ambassador McCarthy conveyed his appreciation to all who have helped these campaigns, “The Ministry of Health has done a remarkable job containing the spread of COVID-19.  We appreciate all of the hard work that healthcare workers have done across the country to help distribute the vaccine.  Over the last year, we’ve trained thousands of them to deliver that jab in primary care facilities all over the country.  We have held our own vaccination drives in partnership with the Ministry of Health. And our colleagues from the Peace Corps Liberia have led drives in Kakata, Ganta, and, starting today, West Point.  Additionally, we have worked with our Liberian partners to train more than 200 community health assistants and volunteers to educate the Liberian public about COVID-19 and how it can be prevented.  And we have helped fund social media, radio, television, and print campaigns to counter misinformation and encourage people to get vaccinated.”

The U.S. Government has trained more than 2,000 AFL personnel (civilian and military combined), assisting the Government of Liberia in its efforts to build and maintain an apolitical and professional military force.  Providing emergency medicine mentorship is part of this ongoing effort.  We are in the business of building future together, and a well-funded and trained military is essential for Liberia and the region’s long-term stability.