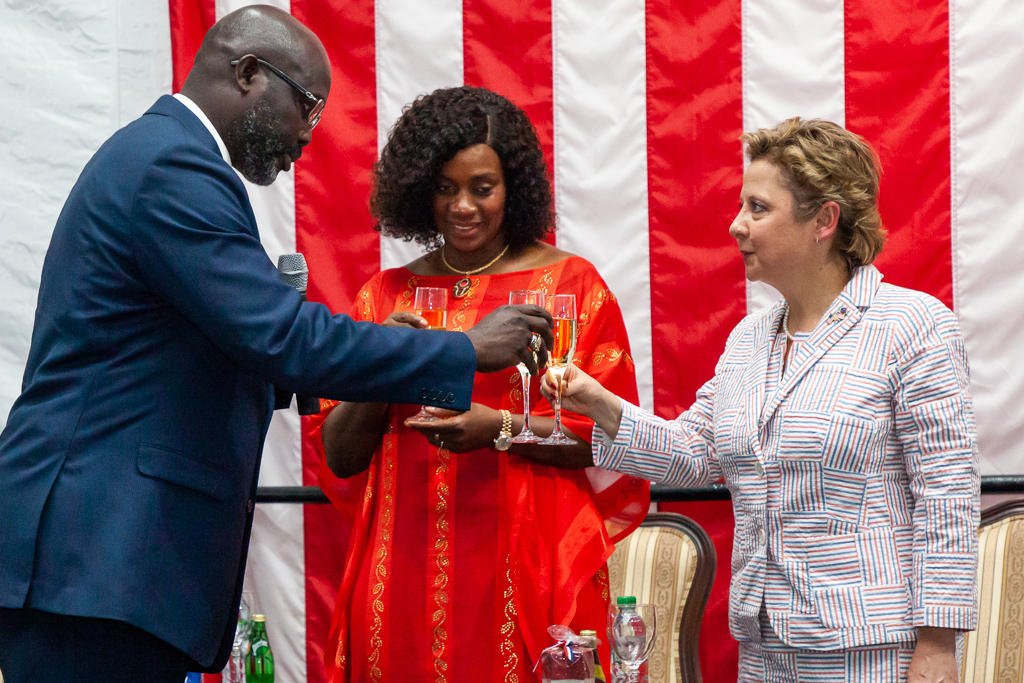 It is my great privilege to welcome His Excellency, the President of the Republic of Liberia, Dr. George Manneh Weah and Madam First Lady Clar Weah; as well as the Honorable Speaker of the House of Representatives Bhofal Chambers, president pro tempore of the Senate Albert Chie, and members of the Legislature; his Honor, the Chief Justice of the Supreme Court Francis Korkpor; the Dean of the Cabinet and Foreign Minister Gbehzohngar Findley, and other ministers and government officials; the Dean, representatives of the diplomatic corps and UN agencies; traditional and religious leaders; civil society; implementing partners; colleagues, friends, and members of the Fourth Estate, to whom I wish a belated press freedom day.  Thank you for the vital role you play in Liberia’s development.

To all our special guests, we are delighted to welcome you today in celebration of the 243rd anniversary of the signing of the United States’ Declaration of Independence.  As most of you know, observation of America’s Independence Day normally occurs on the fourth of July, so today we are 57 days ahead of schedule.  There have been many colorful theories as to why this is happening.  Actually, many U.S. Embassies around the world host these annual celebrations outside of July for a variety of reasons including to accommodate extreme weather, out of respect for elections or religious or local holidays, or the coincidence of hosting important visitors.  This year in Saudi Arabia, our Embassy hosted July 4th in February, in Egypt it was in March, and in Pakistan it was in April, so in Monrovia today, at least we are closer to the mark than some of our colleagues in other places.  For me, this scheduling decision was based on the realization that many members of my senior leadership team – your friends and partners – will conclude their tours in Liberia in the coming weeks, some before July 4, and I wanted to thank them for representing the American people with such distinction.

I normally have a three minute rule, that out of respect I try not to speak longer than three minutes in front of heads of state, but I ask your indulgence for an extra two minutes today, as this is my fourth U.S. Independence Day celebration as U.S. Ambassador to Liberia.  Over the course of my time here, the Liberian people have repeatedly impressed me with their courage, dedication, and resilience.  I arrived in Monrovia weeks after Liberia was declared “Ebola-free” in 2016 and was inspired by the resolve of Liberians determined to emerge stronger after the epidemic.

In 2017, due to the strength of the country’s institutions, Liberia faced and passed the enormous test of electing a new government.  It was moving to see citizens across the country make their voices heard at the polls through the democratic process.  The result—Liberia’s first peaceful transition of power since 1944—was hailed the world over as a signal of enduring democratic values.  It was amazing to witness such an outpouring of civic pride in the nation.

It was those elections, Mr. President, that you won convincingly, fairly, and peacefully on the campaign trail and at the ballot box that set the tone for your administration.  We witnessed the coming together of all Liberians to work for a peaceful, productive future for this country.

There is no question, that today, Liberia faces profound challenges, but in 2017, the Liberian people overwhelmingly placed their trust in you to lead them. Throughout your life and through the present day, you have extended a hand to those who disagreed with you, and you have protected their right to do so.

As Liberia continues to strengthen the economic, judicial, and political institutions essential for a brighter future, the determination and perseverance Liberia summoned to end war, defeat Ebola, and bring about a peaceful transition of power are now the foundation of this nation.  With those complex challenges successfully overcome, Liberia must seize this day to achieve long-term political and economic stability.  The time is now to reverse corruption and its corrosive and contagious effects.  The time is now to strengthen an economy that provides opportunities in more sectors and where open and transparent competition rules the day.  The time is now to give women and girls a life free of abuse and an equal chance to apply their talents and bring solutions to their community’s and the nation’s challenges.  The time is now to offer ideas on how to improve Liberia’s economic situation, not solely criticize or exacerbate the problems.

As Liberia charts its journey to self-reliance, it is imperative that we recognize the extraordinary importance of civil society in helping the country to achieve a lasting peace.  Liberia’s vibrant media, experienced NGOs, and dedicated faith-based organizations have played—and continue to play—a central role in promoting accountability, supporting conflict resolution, and fostering Liberia’s democracy.

Liberia must now develop a private sector capable of sustaining the livelihoods of the Liberian people.  Increased investment—including foreign investment—is essential for growth, but in order to make Liberia a competitive location for investment, the executive and legislative branches of government must work together to stabilize the economy and lower the barriers to doing business here.

I applaud you, Mr. President, for opening discussions with the International Monetary Fund regarding measures that could restore confidence in the economy and set the stage for growth ahead.  I hope that you, the Liberian government, and the Liberian people remain open to what the IMF recommends so that Liberia can lay the groundwork for future economic productivity and prosperity.

America could not ask for a better friend in Africa, nor one with whom our history is more closely tied.  Please be assured that in good times or in difficult times, we proudly stand in partnership with the government and people of Liberia.

In closing, on behalf of the President of the United States, Donald J. Trump, I ask that you join me in raising your glasses in a toast.

Mr. President, to your health and the enduring friendship between the people of Liberia and the United States.
To life, freedom, and the pursuit of happiness!