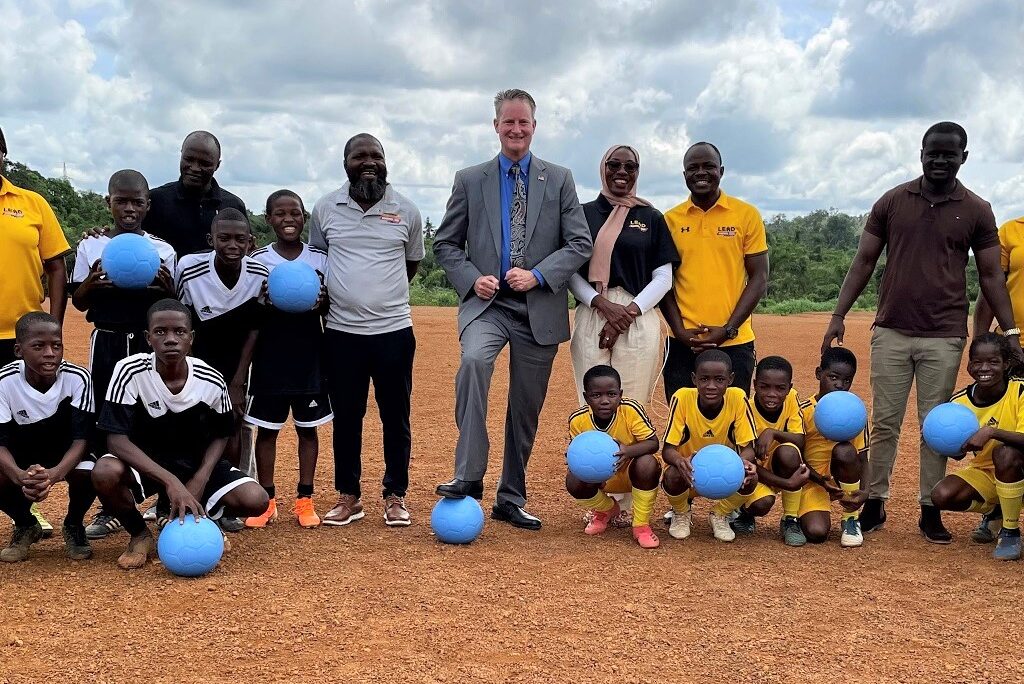 Ambassador Michael McCarthy visited LEAD Monrovia Football Academy in Careysburg on November 12.  He had the opportunity to watch the impressive students on the football pitch as well as in the classroom.  They shared how the unique academy is teaching them to lead a positive change in Liberia.

The U.S. Embassy is proud to have played a small part in the establishment of the LEAD Monrovia Football Academy.  In 2013, American Will Smith was interning at the Embassy when he met Liberian professional footballer Sekou Dgeorges Manubah on a local pitch.  The two struck up a friendship, and Manubah invited Smith to join him to participate in then-Senator Weah’s Liberian Peace & Reconciliation football match.  Recognizing the power of football to bring people together, Smith and Manubah decided to establish a football academy, which they did in 2015.

Today, the independent, nonprofit academy hosts around 150 residential students, from 3rd to 10th grade, from across Liberia.  The student-athletes are selected from underserved communities based on their leadership and academic potential and their interest and skill in football.  The academic classes and football practices are supplemented with life skill lessons, such as leadership, enthusiasm, accountability, and discipline.

We are also proud to count LEAD Academy Monrovia’s executive director, Sona Traore, as one of our exchange alumna!  Ms. Traore participated in the 2010-11 Kennedy-Lugar Youth Exchange & Study (YES) program.  The YES program brings high school students to the United States for an academic year, during which they live with host families and engage in community service and civic education activities.

Ambassador McCarthy, impressed by the student-athletes’ thoughtful questions as much as their skills on the football pitch, remarked how happy he is to see a U.S.-Liberia initiative grow into such a promising Liberian-led, Liberian-managed organization.  “I am so pleased to learn about how our Embassy has played a role in the establishment of the LEAD Monrovia Football Academy.  We too are investing heavily in education in Liberia, because we know that preparing the next generation to lead will be the most impactful step we can take to ensure a bright future for all Liberians.”