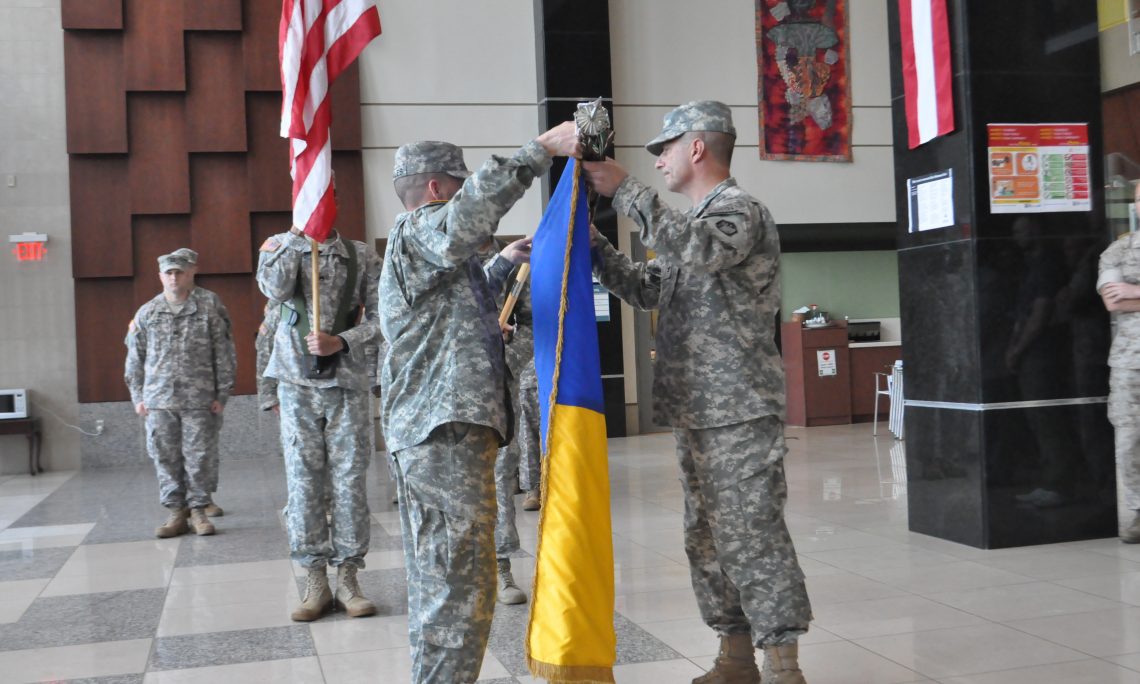 Monrovia, Liberia, June 10, 2015 – The 48th Chemical Biological Radiological Nuclear (CBRN) Brigade has cased its colors to signify the end of its participation in Operation United Assistance (OUA)-TAC.  OUA was part of the overall ‘whole of U.S. Government’ response to assist Liberia in getting rid of the Ebola Virus Disease (EVD).

The brigade held the casing of the colors ceremony at the U.S. Embassy in Monrovia, Liberia on June 4.  U.S. Ambassador Deborah Malac and Embassy staff, as well as representatives from USAID, the Disaster Assistance Response Team (DART), Centers for Disease Control (CDC), and the Defense Attaché’s Office, attended the ceremony.  Colonel Sven Erichsen, OUA Commander, thanked the Embassy, as well as the international community, for the role these institutions played in the EVD response.  He also commended the Liberians who worked so hard to rid their country of EVD and the courageous steps they took fighting a disease that killed so many in their country.  Col. Erichsen summarized his thoughts, saying, “Heroes can come from anywhere.  Courage does not need a uniform.”

The 48th CBRN Brigade was deployed to Liberia in mid-March 2015 to replace the 101st Airborne (Assault) Division.  The brigade worked to monitor the EVD situation and assess the need for additional Department of Defense (DOD) resources to aid in the response.  Ultimately, with the end of Ebola in Liberia, which was announced on May 9 by the World Health Organization, it was determined that OUA could successfully come to an end.  The hard work of these units played a key role in getting Liberia to zero cases of EVD. The soldiers assigned to OUA-TAC will return to their home stations in the United States in the coming days.

Although the U.S. soldiers are returning home, the U.S. Government, through the Centers for Disease Control and Prevention, USAID/OFDA’s Disaster Assistance Response Team, National Institutes of Health and other agencies continue to work with West Africa to get the number of Ebola cases to zero.